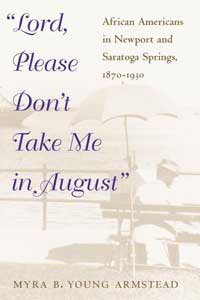 African-Americans in Newport and Saratoga Springs, 1870-1930

In the late nineteenth and early twentieth centuries, northern resort towns were in their heyday as celebrated retreats for America's wealthy. "Lord, Please Don't Take Me in August" documents the experiences of African Americans in Saratoga Springs, New York, and Newport, Rhode Island--towns that provided a recurring season of expanded employment opportunities, enhanced social life, cosmopolitan experience, and, in a good year, enough money to last through the winter.

Affirming that the decision to live in their tiny resort communities was conscious and deliberate, Myra B. Young Armstead shows how Afro-Saratogians and Afro-Newporters organized their rhythms, their routines, and their communities to create meaningful identities for themselves.

Living on streets close to their churches, developing social organizations that promoted their standards of gentility and respectability, and lobbying for wider opportunities, these African Americans actively shaped their lives within the structures and limitations imposed on them. Armstead situates the resort town between the poles of the rural South and the large industrial cities of the North. She shows how these small northern towns, with their seasonal economic rhythms and domestic wage work, permitted an important continuity between rural and urban lifestyles and a path from rural South to urban North besides the jarring, disruptive journey that often ended in the ghetto.

"Lord, Please Don't Take Me in August" tells a story that is at once American and uniquely African American: a story of economic imperatives and enlarged social aspirations culminating in a season--June, July, and August--that brought blacks as close as they could get to the American Dream.

"A well-written evocation of 'the common hopes and loves and labors' of African-American men and women in [Newport and Saratoga Springs], and it is a solid social history that makes a firm case for both similarity and local distinctiveness among urban black communities before the Great Depression." -- Andrew Wiese, Journal of American History

"Armstead has written a compelling urban history in which she places the experiences of blacks in the resort towns of Saratoga and Newport within the context of the larger African-American community. . . . Well written and researched. . . . Illustrated with breathtaking photographs." -- Lillian Serece Williams, American Historical Review

"This book is a genuinely interesting read. Any Saratoga history buff would enjoy it." — Judy Meagher, The Saratogian