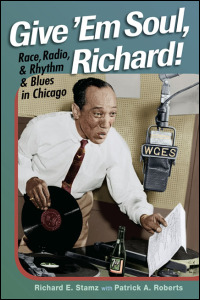 Race, Radio, and Rhythm and Blues in Chicago

As either observer or participant, radio deejay and political activist Richard E. Stamz witnessed every significant period in the history of blues and jazz in the last century. From performing first-hand as a minstrel in the 1920s to broadcasting Negro League baseball games in a converted 1934 Chrysler to breaking into Chicago radio and activist politics and hosting his own television variety show, the remarkable story of his life also is a window into milestones of African American history throughout the twentieth century.

Dominating the airwaves with his radio show "Open the Door, Richard" on WGES in Chicago, Stamz cultivated friendships with countless music legends, including Willie Dixon, Sonny Boy Williamson, Little Walter, Howlin' Wolf, Memphis Slim, and Leonard Chess. The pioneering Chicago broadcaster and activist known as "The Crown Prince of Soul" died in 2007 at the age of 101, but not before he related the details of his life and career to college professor Patrick A. Roberts. Give 'Em Soul, Richard! surrounds Stamz's memories of race records, juke joints, and political action in Chicago's Englewood neighborhood with insights on the larger historical trends that were unfolding around him in radio and American history.

Narrated by Stamz, this entertaining and insightful chronicle includes commentary by Roberts as well as reflections on the unlikely friendship and collaboration between a black radio legend and a white academic that resulted in one of the few existing first-hand accounts of Chicago's post-war radio scene.

"In his own voice, Stamz describes the rough-and-tumble world of early soul radio, the payola system that supplied everything from drugs to food, and the relationships between disc jockeys and independent record companies."--Booklist

"A fascinating narrative about an era that is still underresearched. . . . A welcome addition to what we know about the evolution of black radio."--Journal of Illinois History

Richard E. Stamz (1906–2007) was one of Chicago's first African-American disc jockeys. One of the city's pioneering radio personalities, he was also an important political activist. Patrick A. Roberts is an associate professor of educational foundations and inquiry at National-Louis University in Chicago.