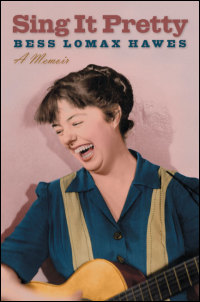 Received an honorable mention from the International Alliance for Women in Music, 2009

A giant in American folklore and folk music tells her story

Bess Lomax Hawes grew up with her father John Lomax and brother Alan in the first family of American folk music. Her compelling account of the folk music boom of the mid-twentieth century and the development of "public-sector" folklore includes family friends Ruth Crawford Seeger and Carl Sandburg, fellow Almanac Singers Woody Guthrie and Pete Seeger, and other musicians and artists. Her own creative endeavors as producer of American folk culture films, author of academic papers and books, and coauthor of the Kingston Trio's hit "MTA Song" (adapted from a local political campaign jingle) unfold alongside her teaching of guitar and American folk music to thousands of adults in Los Angeles. Whether instructing college students in anthropology, learning singing games from the Georgia Sea Island Singers, or directing the Folk and Traditional Arts Program at the National Endowment for the Arts, Hawes tells the larger-than-life story of a woman dedicated to preserving and appreciating America's traditional cultures.

"This book is loaded with enjoyable anecdotes from throughout Ms. Hawes' eighty-nine years. . . . Along the way, we meet many seminal folk music figures and, though these are characters we've all met before, thanks to Bess' storytelling skills, we often see them in a new light."--Sing Out!

"This valuable book will establish Bess Lomax Hawes's reputation more widely as a folklorist, musical teacher, and musicologist, while also making a worthwhile contribution to the music history of mid-twentieth-century North America."--European Journal of Communication

"The Lomax family made an indelible mark on American musical history and vernacular culture, combining performance, scholarship, collecting, administration, and so much more, part of which is well-captured in Bess's wonderful memoir."--Labour/Le Travail

“She learned the tools of folklore fieldwork by transcribing the songs of rural musicians and taught herself how to play these songs, eventually joining the Almanac Singers, which included Woody Guthrie and Pete Seeger, as part of a growing folk movement. . . . Libraries with comprehensive folk music collections will want to own her memoir.”--Library Journal

"A great American story that deserves to be read by millions over decades to come. An immediate classic that is a delight to read."--Daniel Sheehy, director of Smithsonian Folkway Recordings and former director of Folk and Traditional Arts at the National Endowment for the Arts

"An important and totally delightful autobiography--a model of the genre. Written by a master in her field, this engaging and charming book is a very significant contribution to folkloristics."--Sylvia Ann Grider, author of Let's Hear It: Stories by Texas Women Writers

"An insightful tale into the life, thought, and persona of a significant actor in the American culture scene. Hawes's brilliant personality shines through her writing."--John H. McDowell, author of Poetry and Violence: The Ballad Tradition of Mexico's Costa Chica

Bess Lomax Hawes (1921–2009) was a folklorist, teacher, and musicologist, and the first director of the Folk and Traditional Arts Program at the National Endowment for the Arts.

America's Bluegrass Ambassador to the World