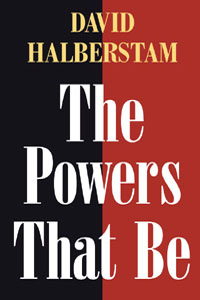 The Powers That Be

The Powers That Be remains one of the most vivid and immediate accounts we have of power at work in America. Pulitzer-prize winning Halberstam writes compellingly and with enormous skill about the personalities behind some of the most influential media figures at play in the last quarter of the 20th Century

Crackling with the personalities, conflicts, and ambitions that transformed the media from something that followed the news to something that formed it, The Powers That Be is David Halberstam's forceful account of the rise of modern media as an instrument of political power, published here with a new introduction by the author.

Beginning with FDR's masterful use of radio to establish the sense of a personal, benevolently paternal relationship with the American people and culminating in the discovery and coverage of the Watergate break-in, Halberstam tracks the firm establishment of the media as a potent means of shaping both public opinion and public policy. He tells the story through vivid, intimate portraits of the men, women, and politics behind four key media organizations: CBS and its board chairman William S. Paley; Time magazine and its cofounder Henry Luce; the Washington Post and successive publishers Philip Graham and his wife, Katherine; and the Los Angeles Times and publishers Norman Chandler and his son, Otis.

"Halberstam deploys a stunning novelistic skill in showing how his scores of characters feel about one another. . . . Every page carries a graphic revelation of some piece of subtle delineation, flashes of insight struck off by the adjacencies of power. So understanding is the reporting that the skeletons, once hauled from their closets, don't rattle much."--Anthony Smith, The Nation "[An] important and admirable book . . . The Powers That Be will remain stirring history."--Richard Rovere, New York Times Book Review "The Powers That Be is extremely good reading. It builds a lucid and engaging narrative about important people and important events and . . . will keep readers up after bedtime. It is also crammed with anecdotes available only to insiders."--American Journal of Sociology

David Halberstam, a Pulitzer Prize-winning journalist formerly with the New York Times, is the author of The Best and the Brightest, The Fifties, and The Amateurs, among many other books.