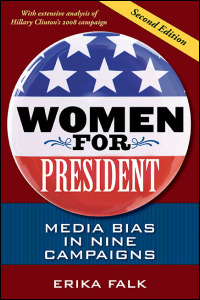 "Falk does an excellent job of pointing out what has changed and what has stayed the same in media coverage of women's political participation (why, for example, always the preoccupation with clothes and hair!)."--Library Journal

"This study could not be more timely. . . . Highly recommended."--Choice

"The book is full of examples . . . that clearly demonstrate that female presidential candidates have been subjected to blatantly discriminatory treatment by the press."--American Journalism

"A must read for political operatives and voters across America."--Donna Brazile

Erika Falk is the associate program chair for the master's degree program in communication at Johns Hopkins University and the former research director of the Washington office of the Annenberg Public Policy Center.