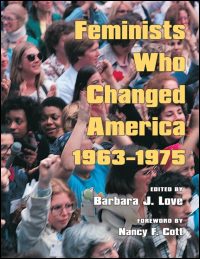 Barbara J. Love’s Feminists Who Changed America, 1963-1975 is the first comprehensive directory to document many of the founders and leaders (including both well-known and grassroots organizers) of the second wave women’s movement. It tells the stories of more than two thousand individual women and a few notable men who together reignited the women’s movement and made permanent changes to entrenched customs and laws.

The biographical entries on these pioneering feminists represent their many factions, all parts of the country, all racesand ethnic groups, and all political ideologies. Nancy F. Cott’s foreword discusses the movement in relation to the earlier first wave and presents a brief overview of the second wave in the context of other contemporaneous social movements.

"This is the first comprehensive directory to document many of the founders and leaders of what is now often referred to as the second wave of feminism, between 1963 and 1975."--Booklist

"What a thrill to read a book that draws you in and helps you relive your own history! . . . This is a significant reference tool and historical record of an exciting time that many older readers of Affilia have lived through and younger readers need to learn about."--Affilia: Journal of Women and Social Work

"Extensive effort was aimed at including as many individuals as possible, with recruiting and information-gathering efforts taking place at conferences, online, by means of research, and by word of mouth. The scope of coverage is admirable. This work will serve as an excellent resource for researchers of second-wave feminist biography. Highly recommended."--Choice

What is really remarkable about Feminists Who Changed America, . . . is its scope. It is the first comprehensive directory of individuals who founded and led the Second Wave Movement. . . . It is indeed a unique and very important addition to the field of women's studies."--Feminist Collections

"No home, library, or school is complete without this guide to the women who looked at the world as if everybody mattered, and so began a revolution."--Gloria Steinem

"This will be the basic text on American feminists of the late twentieth century. All ideologies are included. All ethnic groups, all aspects of the struggle. Activists, academics, sports and labor pioneers, writers and artists."--Kate Millett

"Now future generations will understand how our social revolution changed the world (not just America) so quickly--because many thousands of angry activists fought for fairness and equality in every phase of public and private life. This book immortalizes their names, their lives, and their achievements."--Kim Gandy, President of NOW

"These well researched and presented biographies of women and men who have worked for equal rights for women--one of the most important social movements in the United States and indeed the world--should be a godsend and a necessity for any student of American social history."--Carl N. Degler, Margaret Byrne Professor of American History Emeritus, Stanford University

"With this amazing volume the contributions of more than 2,000 feminist activists from that successful juggernaut of social change known as Women's Liberation are set down for posterity. This is what a movement looks like, and these women are why our movement succeeded."--Susan Brownmiller

"The tenacious men and women whose lives are celebrated here led the way to a social revolution that changed the role of women forever."--U.S. Senator Charles E. Schumer

"Although the second wave women's movement was the largest social movement in U.S. history, it remains the movement least studied--and the movement about which most false impressions remain. This compilation will become an invaluable resource for those interested in learning about the movement and correcting some of those false impressions. A truly impressive accomplishment."--Linda Gordon, professor of history, New York University

Barbara J. Love has worked as an editor, writer, and journalist, and is currently a member of the board of the Veteran Feminists of America. She is the author of Foremost Women in Communications and coauthor of Sappho Was a Right On Woman. Nancy F. Cott is the Jonathan Trumball Professor of American History at Harvard University and the Pforzheimer Foundation Director of the Schlesinger Library at the Radcliffe Institute for Advanced Study. She is the author of numerous books including The Grounding of Modern Feminism.