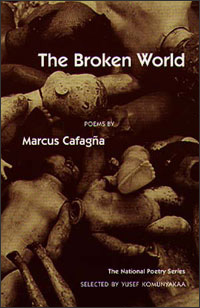 "Marcus Cafagña is a poet who shies at nothing, who will not turn away from what he sees--ordinary people struggling against, and sometimes breaking on, the wheel of their fate. The Broken World is a deeply humane and accomplished first book--probing, watchful, compassionate, and necessary."
-- Edward Hirsch

"I challenge anyone to be unmoved by The Broken World. Cafagña never gives up in these difficult, heart-rending poems." -- Jim Daniels, editor of Letters to America: Contemporary American Poetry on Race

The Broken World, the powerful debut of a poet of great depth and maturity, begins with narratives of individuals caught up in circumstance--a distressed girl on a Detroit overpass, a boy shooting baskets at a crisis center. By the end of the slim volume, Marcus Cafagña has led us through the postwar New York of Jewish Holocaust survivors to his native Michigan, where his marriage ended tragically with his wife's suicide, a death that has come to symbolize for Cafagña the confusion and madness of the twentieth century.