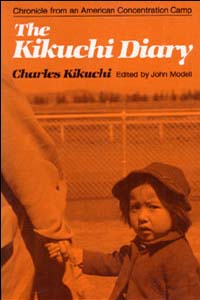 Chronicle from an American Concentration Camp

"How can we fight fascism," wrote Charles Kikuchi in June, 1942, "if we allow its doctrines to become part of government policies?" Kikuchi was one of the American-born majority of more than 100,000 Japanese Americans who were moved from Pacific Coast states to government relocation centers in 1942 out of declared "military necessity." Presented here is the absorbing diary Kikuchi kept from December 7, 1941, to September, 1942, shortly before and during the time he and his family were forced to live in a converted horse stall at Tanforan Race Track. Kikuchi was a twenty-six-year-old graduate student in social welfare at the University of California when war broke out, and his wry observations provide an alternative to both the official view of relocation and the uninformed outrage of many of its present-day critics.

"For anyone interested in the significance of ethnicity, the role of social marginality, and the insidiousness of racialism in American history, The Kikuchi Diary is indispensable reading."--History: Review of New Books

"A powerful human document. . . . Kikuchi is an extraordinary person. He is also a gifted diarist."--Choice

Charles Kikuchi is now retired and lives in New York City. John Modell is associate professor of history at the University of Minnesota.