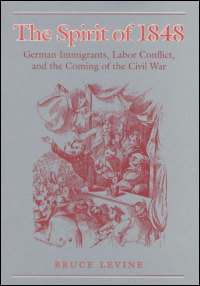 German Immigrants, Labor Conflict, and the Coming of the Civil War

Immigrants and their children became the chief component of the U.S. working class during the nineteenth century. Bruce Levine examines the early years of this social transformation, focusing on German-born craft workers and the key roles they played in the economic and political life of the wage-earning population of antebellum America. Interweaving themes often treated separately---immigration, industrialization, class formation, and the political polarization over slavery---Levine sheds new light on the development of the working class, the nature and appeals of partisan politics, and the conflicts that led to sectional war.

The Spirit of 1848 offers much new information and insight concerning craftwork, the nature of the antebellum labor movement (including the great New York City tailors' strike of 1850), the meaning of nativism, the significance of the push for land reform, the diverse character of the free-soil movement, and the popular appeals of both the Democratic and Republican parties.