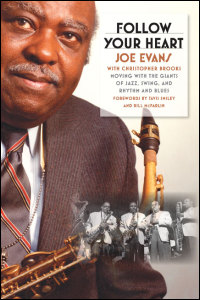 Moving with the Giants of Jazz, Swing, and Rhythm and Blues

The life and career of an important African American music executive, entrepreneur, and musician

Detailing the career of Joe Evans, Follow Your Heart chronicles the nearly thirty years that he spent immersed in one of the most exciting times in African American music history. An alto saxophonist who between 1939 and 1965 performed with some of America's greatest musicians, including Louis Armstrong, Cab Calloway, Charlie Parker, Jay McShann, Andy Kirk, Billie Holiday, Bill "Bojangles" Robinson, Lionel Hampton, and Ivory Joe Hunter, Evans warmly recounts his wide range of experience in the music industry. Readers follow Evans from Pensacola, Florida, where he first learned to play, to such exotic destinations as Tel Aviv and Paris, which he visited while on tour with Lionel Hampton. Evans also comments on popular New York City venues used for shaping and producing black music, such as the Apollo Theater, the Savoy, Minton's Playhouse, and the Rhythm Club.

Revealing Evans as a master storyteller, Follow Your Heart describes his stints as a music executive, entrepreneur, and musician. Evans provides rich descriptions of jazz, swing, and rhythm and blues culture by highlighting his experiences promoting tracks to radio deejays under Ray Charles's Tangerine label and later writing, arranging, and producing hits for the Manhattans and the Pretenders. Leading numerous musical ventures that included a publishing company and several labels—Cee Jay Records (with Jack Rags), Revival, and Carnival Records—Evans remained active in the music industry even after he stopped performing regularly. As one of the few who enjoyed success as both performer and entrepreneur, he offers invaluable insight into race relations within the industry, the development of African American music and society from the 1920s to 1970s, and the music scene of the era.

"Charming, straightforward autobiography of one of the great, unheralded figures in jazz and R&B. . . . From his youth in the middle-class African-American neighborhoods of Pensacola, Fla., to his gigs in the house bands of New York's Apollo Theater and Savoy Ballroom, to the creation of his own record label in the 1960s, Evans's story serves as a history of American popular music and of the African-American experience during the mid-twentieth century."--Kirkus Reviews

“For every Armstrong or Ellington or Charlie Parker, there were countless musicians, their names unknown even to jazz fans, whose skill gave jazz the solid foundation it needed. In Follow Your Heart, jazz journeyman Joe Evans, now in his 90s, presents the story of the sideman, the unsung hero of the golden age of jazz, someone who could read music, learn new tunes quickly, take solos if necessary and swing all the time. . . . Thank you, Mr. Evans, not just for the music you made, but for the man you are.”--The Washington Times

"Memorable . . . tales add up to a story about a life in music well-lived and well-played."--Downbeat

"Even-toned, modest yet imbued with strength of purpose, and a delight to read."--Jazz UK

"The book finds Evans intersecting with the greats of jazz. . . . a refreshing tale that is not already in the history books."--ARSC Journal

"The life story of Joe Evans as voiced in Follow Your Heart will touch your spirit. This moving account of an unsung musician and record company executive who is now in his nineties should be required reading."--From the Foreword by Tavis Smiley

"Evans takes us on his musical journey with humor, honesty, and integrity. He emerges as a living symbol of what our nation should regard with pride; his story represents not only the inequalities faced by so many great musicians but also their extraordinary achievements."--From the Foreword by Bill McFarlin, Executive Director, International Association for Jazz Education

"Saxophonist Joe Evans' uncanny memory of his six-plus decades working alongside the legends and lesser-known heroes of jazz and R&B would be enough to make Follow Your Heart essential reading for serious students of American popular music. But this book does more than collect personal tales from an earlier cultural era. Evans crafts a funny, heartbreaking, and insightful account of living through the violence of Jim Crow segregation, shady business dealings, and the hazards of life on the road."--Aaron Cohen, Associate Editor, DownBeat

"One of the best autobiographies that I have read in many years. Cleverly constructed and extremely well written, this phenomenal book gives a unique perspective into American music history through the challenges, trials, and accomplishments of one of the most underappreciated giants of the American music scene."--Emmett G. Price III, author of Hip Hop Culture

"A personal, first-hand account of the many luminaries of black music whom Evans encountered during his lifetime. Through its thick, invaluable descriptions of jazz culture, Follow Your Heart is loaded with important occurrences in the development of African American music--namely jazz and rhythm and blues--from the 1920s throughout the 1970s."--Cheryl L. Keyes, author of Rap Music and Street Consciousness