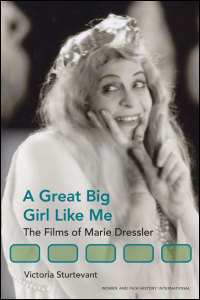 The Films of Marie Dressler

A captivating study of one of classic Hollywood's most fascinating bodies

In this study of Marie Dressler, MGM's most profitable movie star in the early 1930s, Victoria Sturtevant analyzes Dressler's use of her body to challenge Hollywood's standards for leading ladies. At five feet seven inches tall and two hundred pounds, Dressler was never considered the popular "delicate beauty," often playing ugly ducklings, old maids, doting mothers, and imperious dowagers. However, Dressler's body, her fearless physicality, and her athletic slapstick routines commanded the screen. Although an unlikely movie star, Dressler represented for Depression-era audiences a sign of abundance and generosity in a time of scarcity.

This premier analysis of her body of work explores how Dressler refocused the generic frame of her films beyond the shallow problems of the rich and beautiful, instead dignifying the marginalized, the elderly, women, and the poor. Sturtevant inteprets the meanings of Dressler's body through different genres, venues, and historical periods by looking at her vaudeville career, her transgressive representation of an "unruly" yet sexual body in Emma and Christopher Bean, ideas of the body politic in the films Politics and Prosperity, and Dressler as a mythic body in Min and Bill and Tugboat Annie.

"An important, groundbreaking work. In reminding us of the stardom of Marie Dressler--the most significant female box-office star of the early sound era in Hollywood--Sturtevant not only tells the definitive story of this unjustly forgotten figure, but calls into question the very idea that stardom is simply an 'industry of desire.'"--David Desser, coeditor of Hollywood Goes Shopping

"Rich with archival materials, this marvelous study of Marie Dressler's film career deranges the norm, questions critical assumptions, and challenges our historical comprehension of the period."--Jennifer M. Bean, coeditor of A Feminist Reader in Early Cinema

Victoria Sturtevant is an associate professor of film and video studies at the University of Oklahoma.