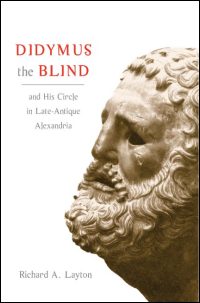 Didymus the Blind and His Circle in Late-Antique Alexandria

Virtue and Narrative in Biblical Scholarship

First English study of a leading 4th Century Christian scholar who’s writings were thought to be completely destroyed and rediscovered in an Egyptian quarry during WWII.

This is the first comprehensive study in the English language of the commentaries of Didymus the Blind, who was revered as the foremost Christian scholar of the fourth century and an influential spiritual director of ascetics.

The writings of Didymus were censored and destroyed due to his posthumous condemnation for heresy. This study recovers the uncensored voice of Didymus through the commentaries among the Tura papyri, a massive set of documents discovered in an Egyptian quarry in 1941.

This neglected corpus offers an unprecedented glimpse into the internal workings of a Christian philosophical academy in the most vibrant and tumultuous cultural center of late antiquity. By exploring the social context of Christian instruction in the competitive environment of fourth-century Alexandria, Richard A. Layton elucidates the political implications of biblical interpretation.

Through detailed analysis of the commentaries on Psalms, Job, and Genesis, the author charts a profound tectonic shift in moral imagination as classical ethical vocabulary becomes indissolubly bound to biblical narrative. Attending to the complex interactions of political competition and intellectual inquiry, this study makes a unique contribution to the cultural history of late antiquity.

"This book retrieves an important Christian thinker from neglect and obscurity. Layton's use of primary texts is exemplary, and his book makes a major contribution to several areas of scholarship--historical, theological, and philosophical." -– David Brakke, author of Athanasius and Asceticism