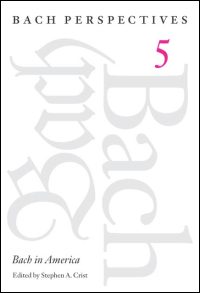 How Bach sparked scholarship, captivated listeners, and inspired musicians in the United States

More than a century passed after Johann Sebastian Bach's death in 1750 before his music found an audience in the United States. Volume Five in the Bach Perspectives series tracks the composer's reputation in America from obscure artist to a cultural mainstay whose music has spread to all parts of the country.

Stephen A. Crist is a professor of music history at Emory University. He is the coeditor of Historical Musicology.