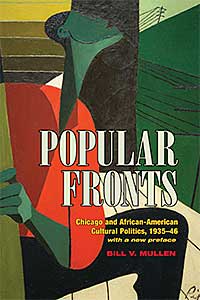 The classic study of the Black Renaissance, with a new preface

The Communist International's Popular Front campaign of the 1930s brought to the fore ideas that resonated in Chicago's African American community. Indeed, the Popular Front not only connected to the black experience of the era, but outlasted its Communist Party affiliation to serve as both model and inspiration for a postwar cultural insurrection led by African Americans.

With a new preface Bill V. Mullen updates his dynamic reappraisal of a critical moment in American cultural history. Mullen's study includes reassessments of the politics of Richard Wright's critical reputation and a provocative reading of class struggle in Gwendolyn Brooks' A Street in Bronzeville. He also takes an in-depth look at the institutions that comprised Chicago's black popular front: the Chicago Defender, the period's leading black newspaper; Negro Story, the first magazine devoted to publishing short stories by and about African Americans; and the WPA-sponsored South Side Community Art Center.

"Mullen marries investigation and a well-executed idea of story in this well-researched piece of scholarship on black art, black literature and literary publications, and the cultural politics of Chicago's African American community."--Choice

"Mullen's mission is to refresh our cultural memories. He wants to remind us not only of African American cultural production in the 'Chicago Renaissance' that took place before and during World War II, but also that the U.S. Left--in the form of the Communist Party and the individuals and organizations of its Popular Front--played a significant role in the period."--American Historical Review

"All readers who are interested in the history of Chicago, African American culture, and leftist politics are sure to find some benefit from Mullen's richly detailed and boldly revisionist study."--Journal of Illinois History

Bill V. Mullen is a professor of English and American studies at Purdue University and the author of Afro-Orientalism.