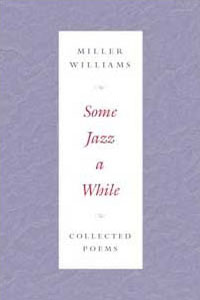 Some Jazz a While

Some Jazz a While, the eagerly anticipated collected poems of one of America's best-loved poets, gathers Miller Williams's most representative work and adds some new pieces as well. This generous collection welcomes newcomers as well as longtime admirers of Williams's trademark style: a compact and straightforward language, a masterful command of form, and an unsentimental approach to his subject matter. Williams treats the mundane interchanges, the lingering uncertainties, the missed opportunities, and the familiar sense of loss that mark daily life with the surgeon's deft touch.

An American original, Miller Williams involves the reader's emotions and imagination with an effective illusion of plain talk, continually rediscovering what is vital and musical in the language we speak and by which we imagine.

Praise for Miller Williams: "Miller Williams is one of those writers whose books drag me snorkeling happily along. Happy as a pig among truffles, I hurry to the next treasure."--William Stafford

"There is no other voice like Miller Williams's. I'd know one of his poems in a dark room, dark alley, dark church where no names are given."--Betty Adcock

"[Williams looks] at what everyone has looked at, seeing what no one has seen."--Howard Nemerov

"His poems reveal the basic spirit and needs of humanity that are always pulsing behind the facade of civilization."--Richard Hugo

"Miller Williams writes about ordinary people in the extraordinary moments of their lives. Even more remarkable is how, doing this, he plays perilously close to plain talk without ever falling into it; how close he comes to naked sentiment without yielding to it; how close he moves to being very sure without ever losing the grace of uncertainty. Add to this something altogether apart, that what a good reader can expect to sense, coming to these poems, is a terrible honesty, and we have among us a voice that makes a difference."--John Ciardi

Miller Williams, University Professor of English and Foreign Languages at the University of Arkansas and founding director of the University of Arkansas Press, is the author, coauthor, or translator of twenty-eight books, including twelve poetry collections. His honors include the Poets' Prize, the Academy Award for Literature and the Prix de Rome for Literature of the American Academy of Arts and Letters, and the Amy Lowell Award. In 1997 he became only the fourth poet ever to write and deliver a poem for a presidential inauguration, joining the celebrated company of Robert Frost (for John F. Kennedy), James Dickey (for Jimmy Carter), and Maya Angelou (for Bill Clinton's first inauguration. 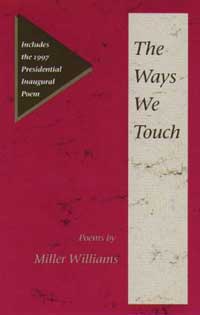 The Ways We Touch 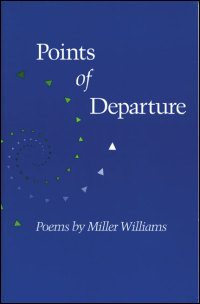