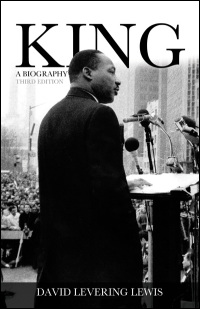 The essential biography of Martin Luther King Jr., in a new edition

Acclaimed by leading historians and critics when it appeared shortly after the death of Dr. Martin Luther King Jr., this foundational biography wends through the corridors in which King held court, posing the right questions and providing a keen measure of the man whose career and mission enthrall scholars and general readers to this day. Updated with a new preface and more than a dozen photographs of King and his contemporaries, this edition presents the unforgettable story of King's life and death for a new generation.

"A well-researched, clearly written and well-balanced account. . . . [King] is presented as neither a saint nor a sinner, but a sincere moral activist who won some and lost some, and who would have preferred--but ultimately was unable--to live to fight another day."--Charles V. Hamilton, New York Times Book Review

"An excellent book that will do more to keep Martin Luther King and his 'dream' alive in a different era than would more fulsome tributes."--Louis R. Harlan, American Historical Review

"Easily the best book on King . . . . With verve and insight, the book sets forth the drama of a man who rose to international fame and acclaim, and, having reached the pinnacle of his career, found the world he had helped to create dissolving about him. . . . An excellent introduction to the complex career and personality of a major figure of our times."--August Meier, Saturday Review

"David Levering Lewis's classic biography of Dr. Martin Luther King Jr. captured the voices and feeling of the times in its thoughtful and thorough early review of Dr. King’s legacy. I am deeply grateful it is being introduced to a new generation of readers and commend it to all."--Marian Wright Edelman, President, Children's Defense Fund

"A striking book that raises arguments about King and the movement he sprang from."--Julian Bond, Chairman Emeritus of the NAACP Board of Directors

David Levering Lewis is Julius Silver University Professor and professor of history at New York University. Each volume of his two-volume W. E. B. Du Bois biography won the Pulitzer Prize for Biography. He is the author of eight books and editor of two more.