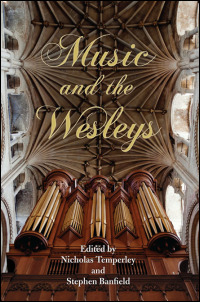 Music and the Wesleys

The music, religion, and relationships of the exceptional Wesley family

Providing new insight into the Wesley family, the fundamental importance of music in the development of Methodism, and the history of art music in Britain, Music and the Wesleys examines more than 150 years of a rich music-making tradition in England. John Wesley and his brother Charles, founders of the Methodist movement, considered music to be a vital part of religion, while Charles's sons Charles and Samuel and grandson Samuel Sebastian were among the most important English composers of their time.

This book explores the conflicts faced by the Wesleys but also celebrates their triumphs: John's determination to elevate the singing of his flock; the poetry of Charles's hymns and their musical treatment in both Britain and America; the controversial family concerts by which Charles launched his sons on their careers; the prolific output of Charles the younger; Samuel's range and rugged individuality as a composer; the oracular boldness of Sebastian's religious music and its reception around the English-speaking world. Exploring British concert life, sacred music forms, and hymnology, the contributors analyze the political, cultural, and social history of the Wesleys' enormous influence on English culture and religious practices.

"Excellent collection of essays. . . . The Wesley family was a remarkable dynasty and Music and the Wesleys is a significant contribution to the examination of their legacy."--The Journal of the Association of Anglican Musicians

"A major contribution to our understanding of church music, the Wesley family, and concert life in the eighteenth and nineteenth centuries by leading experts in the field. There is truly no competitor for this volume."--David W. Music, author of Christian Hymnody in Twentieth-Century Britain and America: An Annotated Bibliography

Nicholas Temperley is professor emeritus of musicology at the University of Illinois at Urbana-Champaign and the author of The Music of the English Parish Church and other works. Stephen Banfield is Stanley Hugh Badock Professor of Music at the University of Bristol. His books include Sensibility and English Song: Critical Studies of the Early Twentieth Century.