Grounded in Charles Joyner's unique blend of rigorous scholarship and genuine curiosity, these thoughtful and incisive essays by the eminent southern historian and folklorist explore the South's extraordinary amalgam of cultural traditions.

By examining the mutual influence of history and folk culture, Shared Traditions reveals the essence of southern culture in the complex and dynamic interactions of descendants of Europeans, Africans, and Native Americans. The book covers a broad spectrum of southern folk groups, folklore expressions, and major themes of southern history, including antebellum society, slavery, the coming of the Civil War, economic modernization in the Appalachians and the Sea Islands, immigration, the civil rights movement, and the effects of cultural tourism.

Joyner addresses the convergence of African and European elements in the Old South and explores how specific environmental and demographic features shaped the acculturation process. He discusses divergent practices in worship services, funeral and burial services, and other religious ceremonies. He examines links between speech patterns and cultural patterns, the influence of Irish folk culture in the American South, and the southern Jewish experience. He also investigates points of intersection between history and legend and relations between the new social history and folklore.

Ranging from rites of power and resistance on the slave plantation to the creolization of language to the musical brew of blues, country, jazz, and rock, Shared Traditions reveals the distinctive culture born of a sharing by black and white southerners of their deep-rooted and diverse traditions.

"Joyner's is a deeply humane and hopeful vision. He celebrates what he loves about a culture in a brilliant essay on the dulcimer, for example, and is just as clear about what he thinks stifles a culture's natural transformations, as do seacoast developers and the commercialization of folkways. But neither celebration nor criticism is the intellectual heart of this collection. Instead, Joyner's essays work in two ways toward making a middle ground in the interpretation of southern life and history. First, his abiding interest in how tradition adapts to change leads him to emphasize the balance in the history of racial conflict. . . . On a second kind of middleground, Joyner's effort is to bring into common cause the work of historians and folklorists."--Journal of American History

Charles Joyner is Burroughs Distinguished Professor Emeritus of Southern History and Culture at Coastal Carolina University, past president of the Southern Historical Association, and the author of Down by the Riverside: A South Carolina Slave Community. 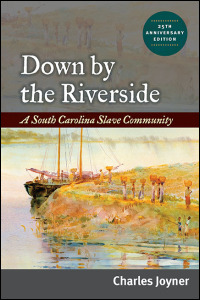 The Blues Tradition in the Southeast