All Posts   »   A Good Dancer by Drid Williams 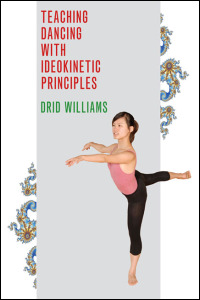 The German philosopher, Friedrich Nietzsche (1844—1900), once said, “I would not know what the spirit of a philosopher might wish more to be than a good dancer” [The Gay Science,[1] section 381]. I’ve always wondered what he meant by “a good dancer” although I didn’t spent much time thinking about how he connected dancing and poetry. I did spend a lot of time thinking about what a good dancer was during the years I taught dancing (1957-1967) in New York City.

By the time I left Portland, Oregon, where I started teaching in 1948, I was dissatisfied with the way I taught ballet and modern concert dancing, but I couldn’t put my finger on the source of the dissatisfaction. I knew that the pervading sense of what was wrong was tied to the fact that dance students (whether aspiring professionals or not) were too dependent on meâ€”on everything I said in technique classesâ€”but I didn’t know how to fix it.

Some illumination was provided by Celia Sparger[2] at Sadler’s Wells School (now, the Royal Ballet) when I took three of my students there for study in the late ‘forties, but the fact that the English school could choose its students, thereby eliminating anyone with minor physical difficulties meant that their teachers simply didn’t face the kinds of problems that are typically found in American schools and academies of dancing. When I moved to New York, I began hearing of Dr. Lulu Sweigard. To be honest, what I heard wasn’t flattering. For example, many thought she was crazy when she said “Movement resides in the thinking, not muscle action,” but this is what intrigued me, and the rest is historyâ€”in the form of the book recently published by the University of Illinois Press. As readers will discover, teaching with ideokinetic principles provided solutions for my dissatisfaction in several ways:

2. In order for dance students to develop precise movements of their bodies, the dance teacher has to provide them with accurate imagery.[3]  Teachers need to go over what they say in technique classes very carefully, weeding out everything that is anatomically impossible, such as “Turn your knees out,” “Tuck your pelvis under,” “Keep your spine straight,” and they should stop telling students what not to do, instead of telling them what to do, for example, “Straighten your knees” instead of “Don’t bend your knees” (see Appendix 5, p. 87).

With these clues in mind, I can say that a good dancer is in control of his or her body. Good dancers can protect themselves from the horrors that Gelsey Kirkland describes:

I have a vivid memory of one of the teachers stopping me in the middle of class to demand that I turn out my feet. There was no regard for the knees or hips, which in my case were distorted to the breaking point. The teacher refused to continue the class until I complied with her wishes. . . . During my third year of training, I was introduced to toe shoes, the standard footwear for all ballerinas since the mid-nineteenth century. . . . Misguided and caught between excessive demands for turn-out and pointe, my feet had already begun to deform. At the age of eleven, I came down with a severe case of bunions. Many of the teachers had the same malady, caused from years of strain placed on the foot. It was said that Balanchine cherished the aberration of line induced by bunions, that they contributed to the impression of winged feet (Kirkland 1986: 34-35). [4]

Kirkland was a very good dancer, but she lived a lifetime with deformed feet. She was never taught how to substitute good imagery for bad in a technique class.

Today’s dancers, whether amateur or professional, need not suffer in the same ways that many of their predecessors did. Teaching Dancing With Ideokinetic Principles explains in detail why that is the case.

Based in Minnesota, Drid Williams is the senior editor of the Journal for the Anthropological Study of Human Movement and the author of Teaching Dancing with Ideokinetic Principles.

[1] The book’s title uses a phrase that was well known at the time. It was derived from a ProvenÃ§al expression (gai saber) for the technical skill required for poetry writing that had already been used by Ralph Waldo Emerson and E. S. Dallas and, in inverted form, by Thomas Carlyle in The Dismal Science. The book’s title was first translated into English as The Joyous Wisdom, but The Gay Science has become the common translation since Walter Kaufmann’s version in the 1960s. Kaufmann cites The Shorter Oxford English Dictionary (1955) that lists “The gay science (ProvenÃ§al gai saber): the art of poetry” (Wikipedia).

[3] Martha Graham’s famous admonition, spoken in one of her classes — “Lamb of God, that is not a plié!” — just isn’t enough.