To coincide with the Association for Education in Journalism and Mass Communication (AEJMC) annual meeting August 8-10, 2013, in Washington, D.C., we are offering eBook versions of three University of Illinois Press communication titles on sale for $2.99. The sale will run through August 31.

Can the Press Be? by Randall P. Bezanson
In How Free Can the Press Be? Bezanson explores contradictions embedded in understanding press freedom in America by discussing nine of the most pivotal and provocative First Amendment cases in U.S. judicial history.

“Bezanson provides the kind of glimpses into the background of [court] cases that students love. . . . And he asks provocative questions at the end of each chapter which are virtually guaranteed to spark some lively debate in class about what the limits of press freedom ought to be.”–Journalism & Mass Communication Educator  Buy the Kindle version here. Buy the Kobo version here. Buy the Nook version here. 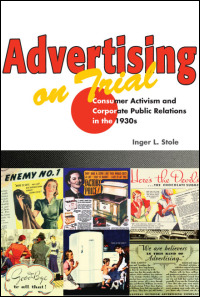 on Trial: Consumer Activism and Corporate Public Relations in the 1930s by Inger L. Stole
Stole examines how consumer activists sought to limit the influence of corporate powers by rallying popular support to moderate and transform advertising. She weaves their story together through the extensive use of primary sources, including archival research done with consumer and trade group records, as well as trade journals and a thorough engagement with the existing literature. Stole’s account of this contentious struggle also demonstrates how public relations developed as a way to justify laissez-faire corporate advertising in light of a growing consumer rights movement, and how the failure to rein in advertising was significant not just for that period but for ours as well. Buy the Kindle version here. Buy the Kobo version here. Buy the Nook version here.