Posted by michael
in author commentary, Sarajevo: A Bosnian Kaleidoscope | Comments Off on Greta Redux by Fran Markowitz

This is the fifth post of a multi-part series by Fran Markowitzâ€”author of the new book Sarajevo: A Bosnian Kaleidoscopeâ€”on her recent trip to Sarajevo and Banja Luka, Bosnia-Herzegovina, August 23-31, 2010.

It had rained the night before, and suddenly Sarajevo was cool and fresh.  I headed out for a long morning walk along the Wilson Promenade along the southern bank of the Miljacka River.  I walked and walked taking in the air, the sights, the people-with-dogs and those with umbrellas; the sounds of church bells, muezzin calls and tinny music blaring from outdoor cafes.  After a few hours, I finally felt refreshed from yesterday’s long, hot and arduous bus trip.

As agreed, at 2 p.m. I met Greta at a lovely Italian restaurant in the center of town.  Usually she has Sunday lunch with Dragica, who retired some years ago from the position of secretary general of the Jewish Community.  This week Dragica was hosting family members who live in Italy.  Greta commented that for the past few weeks the restaurant was nearly empty.  This week, although it is Ramadan, business was brisk.

We switched our conversation to my impressions of Banja Luka.  I exulted in its greenery and then said that, in comparison to Sarajevo, I felt that Banja Luka was more secular and that its population was more homogeneous.  Greta told me that she had designed a factory there, and after the earthquakes in the 1970s she was part of an all-Yugoslavia commission that evaluated the damage and apportioned a budget for repairs.  But ever since 1992 when the war broke out, Greta has not been anywhere in the Republika Srpska, not has she had any dealings with people there, or in Serbia, including her hometown of Novi Sad. 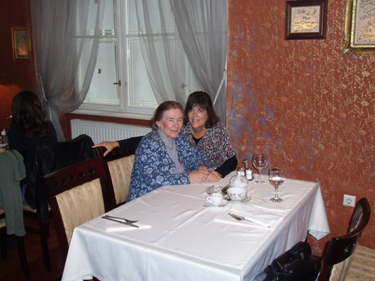 The afternoon turned to evening, and I just knew I had to ask for a photo.  I might not ever see Greta again, and she was very dear to me.  Greta said that she does not like having her picture taken because once she was a very beautiful woman, and now, well, she is old and not so beautiful anymore.  To me, she is strikingly beautiful, elegant, highly charming and intelligent.  The waiter took our picture, and I love it!