In the Bascarsija and beyond by Fran Markowitz

Posted by michael
in author commentary, Sarajevo: A Bosnian Kaleidoscope | Comments Off on In the Bascarsija and beyond by Fran Markowitz

This is the third post of a multi-part series by Fran Markowitzâ€”author of the new book Sarajevo: A Bosnian Kaleidoscopeâ€”on her recent trip to Sarajevo and Banja Luka, Bosnia-Herzegovina, August 23-31, 2010.

On Monday and Tuesday I spent most of my time in the Austro-Hungarian part of Sarajevo, in Marjindvor and in the city center.  I devoted today to the Turkish parts. 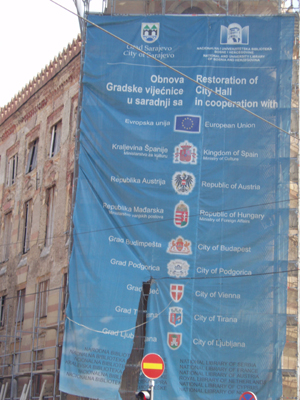 I wandered around the Old City where the VijeÄ‡nica sits under complete scaffolding.  Now instead of commercial advertisements, a huge banner states that the European Union, the Kingdom of Spain and a long list of countries and municipalities are financing the building’s renovation.  In the BaÅ¡Ä?arÅ¡ija, a wide variety of coffee sets and trays are on display; so too are long, colorful scarves of cotton and polyester, others are labelled as Pashmina.  Scattered among these souvenir stalls are carpet vendors, gold and silver jewelry shops, artists’ galleries, and, of course, various cafes and eateries.

Wondering if I’ll have enough money at the end of my visit to make a serious purchase, I enter the Ketar carpet shop.  Its owner explains the cost of various pieces, depending on their size and quality.  He tells me that his prices are 2/3-1/2 of what I would pay in Istanbul for similar products.  He shows me the difference between antique carpets, 20th century pre-1992 Bosnian carpets, and those produced today.  Many antique carpets were destroyed in the war, and immediately after, the best surviving pieces were bought up by the internationals.  Today’s carpets are good, very good, but their quality is not as high as in socialist Yugoslavia, when cooperatives bought the best wool and the best dyes in bulk.  Women worked together weaving in large halls. Today these combines do not exist: there is not enough capital to purchase the finest materials; the women weavers work out of their homes and are paid by the piece.

Next, I walked into a picture gallery where I hoped to find a naÃ¯ve painting.  There are dozens of pictures of Bosnia’s bridges and rather Orientalist renderings of donkeys, door, minarets and pomegranates.  I strike up a halting conversation with the gallery’s owner.  He brings me a naÃ¯ve painting that is dark and foreboding.  No thanks.  I ask about business.

We don’t have the same kind of tourists as we had in Yugoslavia.  That was a time when tourists came, stayed in hotels, dressed with care, ate in restaurants, shopped for the finest things.  Now many of our tourists wear t-shirts, carry all their possessions in a rucksack, buy a tin of paÅ¡tet (pÃ¢té), and sleep in the park.  And instead of buying authentic, authored workâ€”our paintings, carpets, copper work and filigranâ€”they buy the cheapest trinkets as souvenirs.

I ask about an impressionistic watercolor scene of Sarajevo under a sunny sky.  I said I liked it because I couldn’t tell if it portrays early spring or late fall.  He told me that it is a winter scene he painted from his memory or a day when he was a soldier stationed on the hills.  I asked how much he wanted for the painting.  He named a price, and then immediately reduced it “because of your love for Sarajevo”.  We closed the deal with glasses of juniper berry juice, a regional specialty. 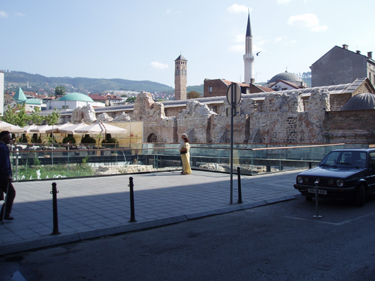 At noon I met with Greta who turned 86 in June, and is as beautiful and elegant as ever, at the Jewish Community.  After a cursory round of greetings we left to go for coffee.  Greta complained that there are so few places in Sarajevo that are cool and quiet, but she knew the perfect spot, the lobby of a refurbished, air-conditioned hotel.  And off we went.

I must admit that I was a bit apprehensive.  I had sent a copy of Sarajevo: A Bosnian Kaleidoscope to Greta a month or two earlier.  As soon as I phoned her she told me that she had read the entire book and was ready to present me with her critique.  When we were seated she said:

I read the first seven chapters, that is, before I got to the Conclusion, and throughout my reading I thought: This book is too optimistic.  You can’t really know how hard it is for ordinary people to live here.  Pensions are at 1/3 of what they should be, people like me who worked their entire lives and contributed everything they were required to their pensions are only getting a fraction of what they are due.  Prices are high; pensions are low, and so are salaries.  This is the case for regular working people, that is, for everyone, except for politicians and those people who just came to Sarajevo and are building villas in the hills.

With an ironic smile and a bit of a laugh Greta summarized her view of Bosnia-Herzegovina:

It is not one state.  It does not even approach being a state.  I say that BiH is a black hole in the middle of southern Europe.

She continued her critique of Bosnia by focusing on the unhealthy influence of Wahabiism, a new-for-Bosnia form of fundamentalist Islam that is coming from Saudi Arabia.  Its influence increases, she says, with every year.

And now when something, for example, happens in Gaza you’ll see these anti-Jewish writings.

I ask if they are anti-Israeli or anti-Jewish.  Greta retorts:

People are too ignorant to know the difference.

Greta updates me on the non-results of a lawsuit that Jakob Finci, president of the Jewish Community of BiH and a lawyer in his own right, initiated in the European Court of Human Rights a few years back.  He argued that the constitutional stipulation that only Bosniacs, Croats and Serbs can serve in the state presidency and in the upper house of the BiH Assembly is discriminatory.  Dervo SejdiÄ‡, a Rom, joined the case, and in December 2009 they received a favorable verdict.  But, Greta added, “They got nothing from it except proving that there is unequal citizenship in Bosnia.”  She highly doubts that the verdict will be implemented in the upcoming October elections because although Finci was to have been awarded some 40,000 (KM or euros?), he hasn’t received even a penny.  But Greta will go to vote in October; there is no question, “We must vote!” Before parting we made a Sunday lunch date.

“Phew!” I thought to myself after we said our good-byes, “Greta’s critique wasn’t at all harsh.”  Mak and Klara had already pointed out a few mistakes that I had made in the Bosnian language.  And at the very end of my stay, I would be taken to task for printing some incorrect biographical information.  But for now, I was off the hook.

That evening I joined NataÅ¡a at the Jewish Community, where she was coordinating a work-study visit by 40 Israeli students participating in a “Journey into Jewish Heritage”.  After dinner Klara showed her film, “Sarajevo Mi Sevdad De Oro,” about the Jewish Community’s efforts during the 1992-95 siege.  I left about 30 minutes into the film to meet with Mak. What a surprise to see him!  Mak lives in the Netherlands and was only scheduled to be in Sarajevo during the last weeks of July.  But he caught a vicious virus and ended up staying much longer than anticipated in his parents’ home.  Tonight, his penultimate evening in Sarajevo, he had his father’s car, and we went up, up, up the mountains to a café with a fabulous panoramic view of the city lights.  After we were seated, we scrunched up our eyes, trying to imagine how things looked in the wartime darkness of 1993, 94 and 95.

Mak was 12 years old when he fled Sarajevo with his mother on one of the convoys.  His father joined them in Holland a few years later.  After the war, his parents returned to Bosnia, but Mak stayed to complete high school.  He then rejoined his parents and enrolled in Sarajevo University.  But after a few years, Mak re-returned to Holland in order to achieve his academic and career goals.  We talked about Bosnia’s current corruption scandals and about some strange happenings at the BiH embassy in the Netherlands.  And about my book, his film and other things.  It grew late and chilly up there on the mountain, so we headed back down to the city.

After we parted, I packed a bag for my early morning bus trip to Banja Luka and went to sleep.