This is the second post of a multi-part series by Fran Markowitzâ€”author of the new book Sarajevo: A Bosnian Kaleidoscopeâ€”on her recent trip to Sarajevo and Banja Luka, Bosnia-Herzegovina, August 23-31, 2010. 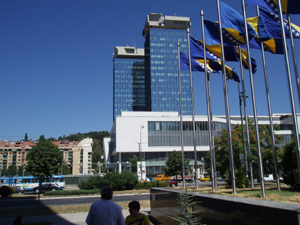 I started this day with a stroll over to what had been known for more than 120 years as the Zemaljski Muzej, or the Landsmuseum, erected in 1888 by the Austrians to (help) establish a regional identity and loyalty for the multi-faith population of Bosnia-Herzegovina.  Nowadays the structure, which was heavily damaged during the 1992-95 war is known as the National Museum of Bosnia and Herzegovina.  It was here that I began my first visit to post-war Sarajevo in August 1997 and where I met Lebiba.  Today I was on my way to see her again.

I walked past the newly rebuilt BiH Assembly building and marveled as I looked across the street to the always shockingly bright daffodil-colored Holiday Inn.  Behind it is the Avaz tower that began to take shape in 2006 and opened for business three years later.  One person described it to me as a “great chimney,  a furnace, something menacing and out of place.”  Later in the week, my friend Greta, who is a retired professor of architecture, told me that she calls the Avaz tower, the Crna Udovica, or Black Widow, for it looks scary, frightening and even devouring. 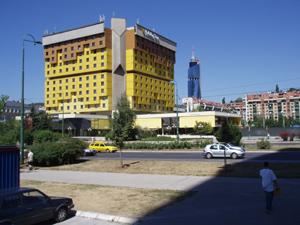 Lebiba and I, however, do not discuss Sarajevo’s architecture.  The closest we come to that subject is her response to my query about the Old City house she and her husband had purchased a few years earlier.  When I last saw her in April 2008, she told me that renovation was under way, that I would be visiting her there during my next trip to Sarajevo.  Now she smiled as she said, “Opet, drugi put!” [Once again, next time].  She explained that they had to take down and replace the entire roof.  And that the electrical and heating systems were old and dangerous and had to be replaced as well.  And the contractors, and the workers!  It always cost more money and took more time than estimated.  So, you get some money here, another bit of money there; it runs out, and you start all over again.

Comparing her family’s financial position to young people who are starting out in life, Lebiba wondered how in the world they can afford to buy an apartment, to get started in life.  Like many other Sarajevans, she is disturbed that so many urban apartments have been taken over by villagers, “who maybe sell a piece of land, and then their (extended) families help out.”  But instead of the newcomers changing from peasants into cosmopolites, it seems that the rubes are turning the city into a place that better suits their boorish tastes.

We talk about the construction of shopping centers and the difficult economy.  And of the upcoming October elections.  SDP, Lebiba suggests, is the only alternative to the nationalists.  As for the economy, nothing seems to be moving, except for the 2 billion euros of remittances sent to BiH from family members abroad.  This is great economic support for individual families, but it doesn’t do much for rebuilding the country’s infrastructure.  Lebiba tells me that she is happy when people return from abroad because they come back with ideas and a mentality that they learned in Europe, in Canada, in the US and Australia, and can use it to push Bosnia forward.  Maybe…

That afternoon I meet up with Melisa, who was a “young researcher at the institut za istoriju and my first unofficial assistant during the first weeks of my fieldwork in 2004.  Over the years she has been conducting research on pre-Slavic Bosnia and is now in the final stages of completing her MA thesis. She also wrote a history textbook for grade 6 and co-edited a text for 7th graders, entitled, Kultura Religija. We met at our usual place, on the steps of the Catholic Cathedral.  Our meeting was short because Melisa had promised a friend that she would join her to shop for a wedding dress: “My generation is finally doing itâ€”getting married!”  I gave Melisa a copy of Sarajevo: A Bosnian Kaleidoscope, and we made a date for the following Monday.

Then I met up with NebojÅ¡a, who continues to amaze me. NebojÅ¡a works for a Norwegian NGO, whose goal is to advance peace and reconciliation in Bosnia-Herzegovina.  With his cultural astuteness, NebojÅ¡a focuses the workshops and discussions he organizes not on “peace and reconciliation” but on how to live and work together, or “ethnic relations”.  His most successful projects involve the municipal workers and youth in the towns of Srebrenica and Bratunac, where there are high rates of “minority return migration”â€”which means, Bosniacs (Muslims) returning to their homes after acts of genocide in the Serbian Republic.

As we talked about the remarkable grassroots social action that is resulting from his projects, NebojÅ¡a, who is completing his doctoral dissertation in the Department of Ethnology and Cultural Anthropology at Ljubljana University in Slovenia, reminded me that his underlying philosophy of hedonism is a key to his success: “I want to do the things that I enjoy doing.  And to do that I need a society that will support those things.  When the kids say, ‘There’s nothing we can do,’ I tell them, ‘Think of what you enjoy and figure out a way to do it, like picking up the garbage to make the neighborhood look better.  Or an old clothes drive.  Or how my brother and I and one other guy organized the Sarajevo Jazz Festival’.”

But what about the stagnation into which BiH has fallen?  NebojÅ¡a doesn’t necessarily accept that metaphor.  Instead, he sees Bosnians as ironic subjects, and offered me an illustrative anecdote:

Right now the situation is terrible.  There is a bad economy, no work, no jobs.  With the current mayor I have no job.  But I don’t have to worry that I am the victim of discrimination.  If you (the candidate from a different ethnicity) were the mayorâ€”and from everything that I heard, you would certainly do a better job than the present mayorâ€”I would then start to think that I am out of work because of ethnic discrimination.  And that is one (more) thing that I do not want to deal with!

We continued to probe that ironic pose, which, NebojÅ¡a suggests, makes people in Bosnia come up with great jokes and produce spectacular human relationships.  But they come to no problem resolutions. I can’t wait to see NebojÅ¡a’s completed doctoral dissertation.  Needless to say, neither can he!