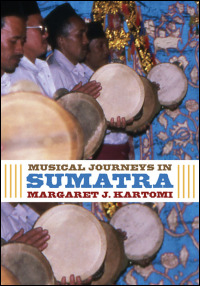 Margaret Kartomi, a professor of music at Monash University in Australia, answered our questions about her new book Musical Journeys in Sumatra.

Q:  Where is Sumatra located?

Kartomi:  Sumatra, the 6th largest island in the world, is Indonesia’s westernmost island. It comprises 10 provinces, 6 of which are discussed in the book.

Q:  How did you come to focus on this part of the world?

Kartomi:  As a new Music Department lecturer at Monash I obtained an Australian Research Committee grant to do research in West Sumatra in the early 1970s, and found the music, dance, and theatre to be fascinating. Books on Javanese and Balinese music had already been published, but Sumatra was almost totally neglected by ethnomusicologists. So I decided to make Sumatra the object of most of my subsequent ARC-funded field trips, published many articles on Sumatran music-culture, and now my first book. I need now to publish books on the other 4 provinces of Sumatra, using field materials from my earlier trips and from new trips in the next 2 years.

Q:  What kind of musical instruments do Sumatrans use?

Kartomi:  There is a great diversity of musical instruments throughout the islands, but
nearly everywhere the artists play ensembles comprising a melody instrument (e.g. a flute, oboe, clarinet, violin, xylophone or metallophone), a pair of hanging gongs and a pair of drums, to which a solo vocalist (male or female) and sometimes a vocal chorus are added. Generally the further north one goes the rarer the gongs and gongchimes (sets of kettle gongs in rows resting on cords).

Q:  Are most handmade and unique or are they more widely
available and common?

Kartomi:  The old handmade instruments are quite rare as elderly craftsmen are not being replaced by younger ones, which means some instruments I collected are obsolete or nearly so. Some bamboo instruments are manufactured locally. Manufactured violins, frame drums, drums, and even gambus lutes, keyboards, etc. are bought everywhere.

Q:  What does music reveal about larger Sumatran cultural
trends?

Kartomi:  The musical trends are closely linked to the lingual, theatrical, and dance repertoires of the many ethnic groups, so the music contributes immensely to each group’s sense of ethnic identity. The history of the music also mirrors Sumatra’s general religious and political history, including the special musics of the Malay and other courts from the third century CE or earlier.

Have Western ideas and cultural practices influenced the music of Sumatra?

Kartomi:  Yes, ever since the Portuguese colonial power conquered Malacca on the Malay peninsula in the 15th century, Western musical melodies and harmony have spawned syncretic Indonesian-Western styles. Especially from the late 19th and the early 20th century, a variety of Sumatran and other Indonesian popular styles have developed that have been influenced by international trends in pop, jazz, rock, etc.

Kartomi:  Sumatran traditional pre-Muslim music such as Minangkabau talempong ensemble music spread widely in Sumatra and Malaya through royal courtly intermarriage and other contact. Sumatra’s Muslim musical styles, such as Aceh’s sitting dances with body percussion that are performed by a row of singer-dancers in the sitting or kneeling position of Muslim prayer have spread throughout Indonesia and Malaysia in such forms as the Malay rodatand the Minangkabau indang genres.

Q:  How has the musical culture of Sumatra changed in recent years?

Kartomi:  In the past 4 decades or so I have found that much less attention is paid to maintenance of high standards of performance except among the relatively small number of professional artists; i.e. younger people are more interested in popular than traditional
music, except at important domestic, commercial and governmental functions where display of ethnic identity is still regarded as important. In general, societies spend less energy on the traditional musical arts than a few decades ago.

Q:  What was the most surprising thing you learned while researching the book?

Kartomi:  Two things. One was the great beauty and elegance of the dances and music of the surviving Hindu-Buddhist tradition even till today, and even in Muslim areas – e.g. the long finger-nail dance with its exquisite mudra-like hand movements emphasised by the wearing of long golden fingernails. This dance probably originated in Sumatra’s southernmost province of Lampung and spread to Sriwijaja, the great Buddhist kingdom centred in Palembang in South Sumatra, and through the Sriwijaya empire spread to Thailand and the southern Philippines.

Another surprise was the great importance of body percussion in the Gayo and Acehnese dances of Sumatra’s northernmost province, Aceh. The singer-dancers “play their bodies” like musical instrments, producing varied rhythms and timbres that often interlock with each other like the interlocking of sets of drums and metallophones in the ensembles that accompany dances.