All Posts   »   The Last Day by Fran Markowitz 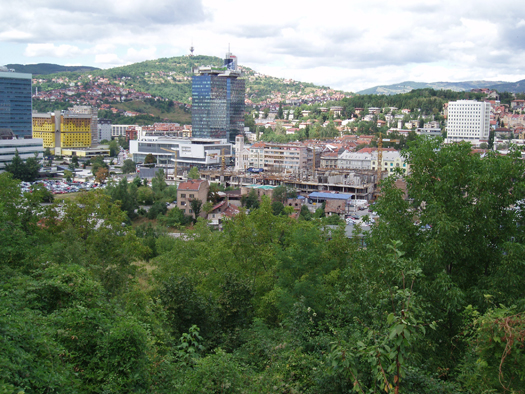 This is the seventh and final post of a multi-part series by Fran Markowitzâ€”author of the new book Sarajevo: A Bosnian Kaleidoscopeâ€”on her recent trip to Sarajevo and Banja Luka, Bosnia-Herzegovina, August 23-31, 2010.

This morning I repeated my walk along the Wilson Promenade; perhaps I went even further than I had on Sunday morning.  It was, after all, my last day in Sarajevo.  I returned, packed, showered and dressed.  I had an hour or so before I needed to leave for the airport.  So I walked down the street toward the Ashkenazi synagogue, hoping to see Klara or NataÅ¡a one last time before I left.

Instead of her usual warm smile, NataÅ¡a confronted me with an icy glare.  She told me in no uncertain terms that I had made terrible mistakes in my book, mistakes so big as to make it a not serious text.  I stood frozen to the spot.  I could feel the blood drain from my face, and my heart drop into my bowels.  I took a breath and in a small voice asked NataÅ¡a to tell me what mistakes I had made.  She did: Her mother, Klara, holds a university degree in psychology and pedagogy, but not a Master’s.  Her father, an architect, never worked as a manual laborer in Israel but continued in his profession.  That was the wonder of her family’s sojourn, that unlike so many others, they both found work in their fields. And as for herself, NataÅ¡a had earned a master’s degree in Rome, not in Genoa; then she worked in Genoa before returning to Sarajevo.  My errors, she told me, were hurtful and insulting.  But as we parted NataÅ¡a said, “Let’s stay in touch.”

I exited the synagogue lobby and slowly walked back to Pansion ÄŒobanija.  My hostesses expressed concern about how pale and crestfallen I looked.  I told them that I made some mistakes in my book.  They tried to convince me that even had I made some errors, it’s not so terrible.  “After all,” the young receptionist- university student said, “you cared enough about us to come from far away and write this book.”  How kind and reassuring.  Nevertheless, I gathered my bags, entered the taxi and left the city with a heavy heart.

As soon as I got home I checked my fieldnotes.  I now understand the source of my mistakes and how they happened.  But that is not the point.  The point is to set the record straight.  So please turn to page 122 of Sarajevo: A Bosnian Kaleidoscope and note that

As I sat in the Vienna airport waiting for my flight I penned the following lines under the title, Mea Culpa:

How can I tell you how sorry I am?
How can I explain?
I cannot.
No excuses.
MEA CULPA.

How did I do it?
Why was I so sure?
Too hasty.
No excuses.
MEA CULPA

I hoped for the joy of getting things right.
But I got things wrong, very wrong.
And instead of celebrating two women whom I respect, admire and love,
I caused you pain.
MEA CULPA.

I sent those verses to NataÅ¡a via email the next morning.  Minutes later I received a note from her and Klara accepting my apology. NataÅ¡a added, “Please do not feel that bad. It happens, but I had to let you know that it hurt us, because, of course, it is our lives we are talking about.”  They then wished me Shana Tova, the Jewish New Year’s greeting, and signed off with love.  Tears streamed from my eyes as I read their words.

Such are the risks and rewards of 21st century anthropology where it has become commonplace, indeed mandatory, that “They Read What We Write.”  Are there any alternatives to this in our highly literate, fast-paced world?  Beyond opting for what Sherry Ortner calls “ethnographic refusal,” or relying on the rather glib-sounding characterization of ethnography as partial truth/partial fiction (pace James Clifford), I take comfort in how the two Rs of reflexivity and responsibility are re-shaping the discipline for the better.  Mistakes have occurred and will continue to happen in twenty-first century anthropology.   Admission of these mistakes, apologizing for them, and taking pains to make amends will have to become part of every ethnographer’s repertoire.  Should all our hosts be as generous as Klara and NataÅ¡a in their willingness to forgive, then there will be good cause to refuse ethnographic refusal, and to continue down the path of humanistic anthropology.

Farewell for now, Sarajevo!  Please accept my book for the stories it tells and the hope it might offer.  May the Bosnian kaleidoscope continue to delight in its multi-colored, multi-ethnic, multi-multi turns!