You have to hand it to the North Koreans.

In a action-packed news cycle where Obama fired the CEO of General Motors, the G20 London Summit convened, NATO celebrated its 60th anniversary, and someone leaked a bootleg copy of the new X-Men movie on the Internet, North Korea has leveraged its satellite launch and carved out its own nonstop news bite on the screen crawls of CNN, BBC, Al-Jazeera, and other global TV networks. With criticism coming full-bore from virtually every global leader, missile defense systems locked and loaded, and the UN Security Council poised to meet in an emergency session, the crisis is steeped in a discourse more commonly articulated during the Cold War. A few of the threats and counterthreatsâ€”just add a small dose of imaginationâ€”seem to faintly echo a Flint movie, Spy vs. Spy, or a Man From U.N.C.L.E. episode.

Almost everyone says the satellite launch is a cover for a North Korean test of ballistic missile technology, and they may well be right. Certainly the North Koreans will gain a huge amount of technical data on their ballistic technologies from their launch. North Korea insists this is a communication satellite for peaceful purposes, arguing that the 1967 Outer Space Treaty grants all nations the right to access outer space for peaceful purposes. And in discussing that very same treaty in Global TV I found that all the nations of the worldâ€”not just the most technologically advanced nationsâ€”were keenly interested in communication satellites from the very first days of satellite development.

On first glance, the idea of North Korea, the most reclusive nation in the world, needing its own communication satellite reminds me of Henry David Thoreau’s witty 1854 observation that “We are in great haste to construct a magnetic telegraph from Maine to Texas; but Maine and Texas, it may be, have nothing important to communicate.”  If North Korea is Maine, then who on earth is Texas, and what do they possibly have to communicate? There may in fact be a “who” and there may in fact be a “what” in this analogy. This leaves the question of “why?” but I will take a stab at that one, too.

In December 2008, North Korea signed a deal for GSM mobile telephony service called “Koryolink” with Orascom, an Egyptian-based telecommunication corporation. This holds the potential to further link North Korea into the Orascom networksâ€”a multinational out of Egypt with extensive cross-investment in global telecommunications, including GSM service in Egypt, Algeria, Pakistan, Tunisia, Iraq, Bangladesh, and now North Korea. The day after Orascom and North Korea agreed to GSM service, Orascom opened a bank in North Korea, and the CEO of Koryolink was appointed as bank president.

So GSM mobile telephony may provide a clue to Thoreau’s question: North Korea is Maine and Orascom is Texas. GSM is the telegraph. This still leaves a question of “what do they have to communicate?” The answer may be early steps for North Korean global e-finance, specifically “mobile remittances” from North Korean expatriate labor in overseas locations. Remittancesâ€”the portion of wages sent back to the home nation by expatriate workersâ€”are becoming big financial drivers in the 21st century. Here in Doha, one often sees workers standing in line at the Western Union window in City Centre, wiring back remittances to their families at home. Western Union, the largest global provider of remittance wire services, estimates total world-wide remittances in 2007 at US$240 billion.

Two months before the North Korean GSM agreement, Orascom and Western Union formed a strategic alliance to “pilot mobile money transfer services” in key Orascom markets. In 2007 remittance revenues flowing back from expatriate labor to the home nation in three Orascom markets looked like this: Bangladesh, $6.6 billion; Pakistan, $6.1 billion; Egypt, $5.9 billion. Many, indeed most of the nations supplying expatriate workers abroad are only now, in 2009, beginning to experience the first introductory steps of online banking and e-finance systems. Orascom and Western Union appear to be developing a transition strategy for moving remittances away from wire services and on to GSM platforms. In other words, GSM-based mobile remittances are poised in the coming years to move over $250 billion of annual global financial flow off of wire services and on to global-networked GSM platforms.

We’ll see if the satellite gets off the ground. 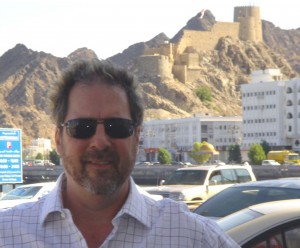 James Schwoch is an associate professor of communication studies at Northwestern University and author of the new book Global TV: New Media and the Cold War, 1946-69. To follow his work in Qatar, become his friend on Facebook.