To Banja Luka and back again by Fran Markowitz

Posted by michael
in author commentary, Sarajevo: A Bosnian Kaleidoscope | Comments Off on To Banja Luka and back again by Fran Markowitz

This is the fourth post of a multi-part series by Fran Markowitzâ€”author of the new book Sarajevo: A Bosnian Kaleidoscopeâ€”on her recent trip to Sarajevo and Banja Luka, Bosnia-Herzegovina, August 23-31, 2010.

Thursday the 26th through Saturday the 28th

If Sarajevo is a Bosnian kaleidoscope, then Banja Luka, the capital of the Srpska Republika is green and Euro-Christian secular. 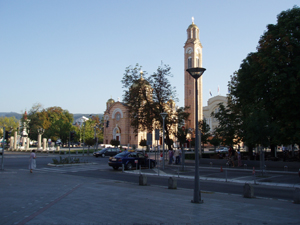 The taxi driver who brought me from the bus station to my hotel in the center of the city answered my question, “How are things going here in Banja Luka?” with one word, slaboâ€”weak.  There’s not much work, not much excitement, not much to look forward to.  I took in those words while thinking about the lush Bosnian countryside I have just traveled, dotted with stone churches, mosques and minarets, Hershey’s kisses shaped haystacks and rushing river waters. 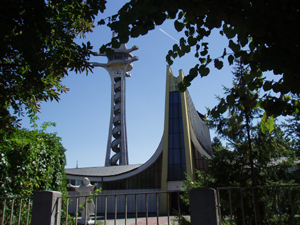 Banja Luka, which in the 1970s and ’80s was hit by earthquakes, boasts a few 19th century Austrian-style buildings, but most structures are mid-20th century low-rise socialist modern.  What Banja Luka does have is sprawling public parks, huge swaths of green grass.  There are two impressive Orthodox cathedrals and the most modern Catholic Church I have ever seen.  There are no mosques in town; no women wearing headscarves; no muezzin calls.  Church 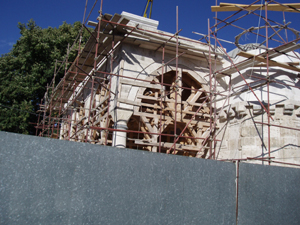 bells ring on the quarter hour, but their sound is muted; it seems to blend into the urban noise. The Ferhadija mosque, which was erected in Banja Luka in the mid-16th century, was blown up in the recent war.  Its site was a crater during the second half of the 1990s; now it is slowly being rebuilt.  Unlike the Christian houses of worship, it is not marked as a tourist site; but the kind young man on duty at the tourism information center circled it for me on my map. 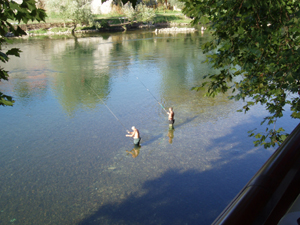 Banja Luka’s greatest (potential) tourist attraction, the Kastel, an Ottoman fortress overlooking the beautifully clear Vrbas River, is in ruins, and inaccessible.  The young man at tourism information told me that renovation plans are scheduled to go into effect during spring, 2011, but, who knows.

As in Sarajevo, people stroll the pedestrian walkways of Banja Luka, peer into shop windows, sit down for a coffee or an ice cream, and continue on again.  Somehow, though, Banja Luka’s Å¡etanje seemed slower, more mechanistic, and lacking in glee.  Before leaving Sarajevo, several acquaintances told me that Banja Luka is known for its good food and beautiful women.  I had a nice fish dinner in the beautifully appointed Allas restaurant, and enjoyed lovely river scenes from cafes on its banks, but somehow, I did not notice that the city’s women were unusually beautiful.

My main reason for visiting Banja Luka was to follow-up on the description that Asja D. had given me in 2002 of the portraits hanging in its City Hall (page 70), and to compare the historical narrative presented in the Museum of the Serbian Republic to that of the National Museum of Bosnia-Herzegovina (pp. 18, 57, 63, 167).  Here’s my report:

In August 2010 no portraits of war criminals hang in the City Hall.  In fact, there are no portraits of anyone, and no icons.  The only pictures decorating the entrance foyer of Banja Luka’s City Hall are abstract paintings. 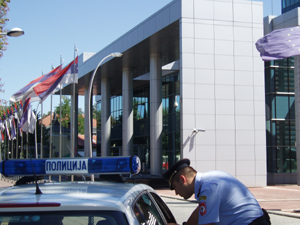 A sparklingly new glass and steel building houses the Republika Srpska parliament.  It looks strikingly similar to the BiH Assembly building in Sarajevo.

Despite what some in Sarajevo have described to me as an attitude of Serbian nationalism and separatism in the RS, a monument to Tito’s Partisans occupies a square next to the upscale Hotel Bosnia off the major avenue named for the Serbian king Petar DjordjoviÄ‡ I.  Among the 21 honored Partisans are Muslims as well as Serbs, Croats, Slovenians, and Macedonians. 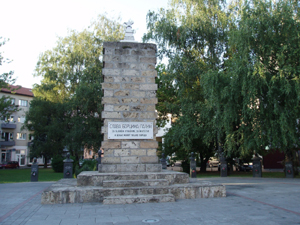 On Friday, August 27th I spent all morning in the Museum of the Serbian Republic.  Like Sarajevo’s Zemaljski Muzej, the museum originally established in Banja Luka had, and continues to have, a regional focus on the area’s flora, fauna, archeology and ethnology.  In the museum of today, much space is dedicated to prehistoric artifacts, and there are small displays of folk costumes, farming implements and local wildlife.  Exhibits then trace the history of the region from the high middle ages until the CvetkoviÄ‡-MaÄ?ek agreement of 1939, described as the “beginning of the disintegration of Yugoslavia on [a] national basis.”  The historical segment culminates in city scenes from 1930 that highlighted the life of an attorney/university rector.  The last display is an exhibit entitled Jasenovac, the notorious concentration camp established by the fascist Croatian state in August, 1941.  The texts that accompany each display are twice-printed, in Serbian in the Cyrillic alphabet, and in English.

The Jasenovac exhibit underscored the fact that three populations were persecuted in the NDH (Independent Croatian State): Serbs, Jews and Romanies.  Photos show the crucifix, dagger, hand grenade and pistol that were held by the men who swore the UstaÅ¡e (the Croatian fascist state’s military) oath.  More photos provided proof that in BiH and Croatia, Catholic clergy gathered around the fascist leader Ante PaveliÄ‡, and that (some) Bosnian Muslims eagerly joined the SS Handzar brigade formed by Himmler, and condoned by the Reis-ul-ulema (Bosnia’s highest Muslim cleric), and the Mufti of Jerusalem.  Immediately following those photos were five portraits of Serbian Orthodox clergy who were imprisoned in Dachau or killed in cold blood in1941 by the UstaÅ¡e.

There are no exhibits or texts on display about 1945-92 Yugoslavia, the 1992-95 wars, or the contemporary Republika Srpska. I was the only visitor in the museum.  I left with a slight feeling of nausea.  The texts were subtle; the exhibits objectivistically documented the past.  Anyone going through the museum would take away the distinct message that the Serbs of Bosnia-Herzegovina, and particularly those of the Banja Luka region, suffered for centuries at the hands of Muslim overlords and, more recently, at the hands of their Catholic-Croat and Muslim neighbors. 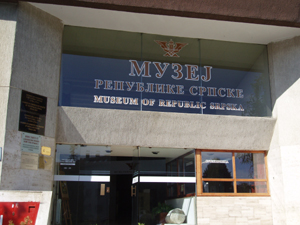 I spent the rest of the day going in and out of empty shops and strolling along the river, stopping every now and again for a frothy cappuccino and a cool glass of water.

On Saturday morning the kind people at the Palas Hotel packed me a brunch of a couple of sandwiches and an apple, which fortified me during the break in my bus journey across the Bosnian countryside.  It was bumpy and hot in an old, creaky bus with no air-conditioning.  Thank goodness there weren’t many passengers, and I had a double seat to myself.  The scenery was as verdant as it had been two days earlier, but the journey was awful!  When we finally reached the Sarajevo Central Bus Terminalâ€”after a detour due to construction–I sighed with relief as I disembarked.  My spirits lifted when I entered an air-conditioned taxi.  The taxi driver, one of NebojÅ¡a’s ironic subjects, told me “Taking a bus trip in Bosnia-Herzegovina is always an adventure!”

That night I went to see Inception at Cinema City.  More irony.