All Posts   »   An Alternate Universe of E-publishing 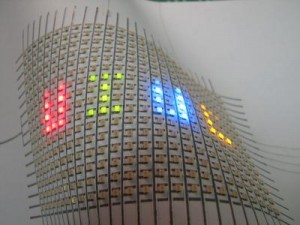 Last week, Physorg presented details about a breakthrough at our very own Research I university here in Urbana-Champaign: a ball-point pen that can draw working circuits on standard paper. What’s more, the paper can be folded hundreds of times with no degradation in the circuits. The research was led by materials scientist Jennifer Lewis and chemical and biomolecular engineer Jennifer Bernhard.

The implications for publishing seem . . . well, if not exactly clear, then super intriguing. For all the distinctions being drawn between print and electronic publications, along comes a technology that points toward a both-and option: our print text can also be our e-text. Imagine a serif-rich font printed with the new ink and in which the interconnected letters become logic gates within the flow of the text. The text becomes language made of language, and each book, chapter, or research article becomes a little working machine. Maybe the operating system is contained within the spine.

What might we do with such intelligent text? For one thing, the text could constitute the program for performing keyword searches on itself — every proper noun, term, and phrase would know its own name. For another thing, the text could constitute the programming for animating elements of itself — figures that come to life when the reader turns the page, for instance, or words that literally glow with significance.

Beyond imitating web pages, such a new kind of publishing could take full advantage of the medium through interaction, a kind of publishing for the makers culture. An essay about diabetes, for instance, could include a lab-on-a-chip test of one’s blood-sugar level on a diagrammatic surface in the book’s appendix. A book about photography could present editing techniques demonstrated by the book itself. A book about environmentalism could include chapter-by-chapter tests for air, soil, and water quality. A book about dance could dance.

The new circuit pen can also draw antennas, which suggests that the text could generate its own Wi-Fi network to transmit and retrieve information as the need arises. Not only might such publications have access to the resources of the internet — every book a netbook — but such books might even chat among themselves. Public libraries become cluster-based supercomputers that change with each acquisition and with each book lent.

Your private library generates an image of you, suggests the book that will make you both that much closer to complete. Your brilliant tattoos begin to blink.

Link to the Physorg article.

Link to the research article appearing in Advanced Materials.