All Posts   »   Graphics Matter: The Potential for Public Instructions as Feminist Technologies by Linda Layne

One of the things we learned in Feminist Technology is that the gender politics (sexism and feminism) of technologies are not only inscribed into products through their dimensions, weight, features, and functions, but often are inscribed upon them too. Following Hardon, we referred to this distinction in terms of hardware and software. For instance, in the case of the home pregnancy test, we called for changes in the software of written instructions included in the package. Oftentimes instructions for use are inscribed directly onto the technology, especially on those intended for public use. We provided examples of this in the book: 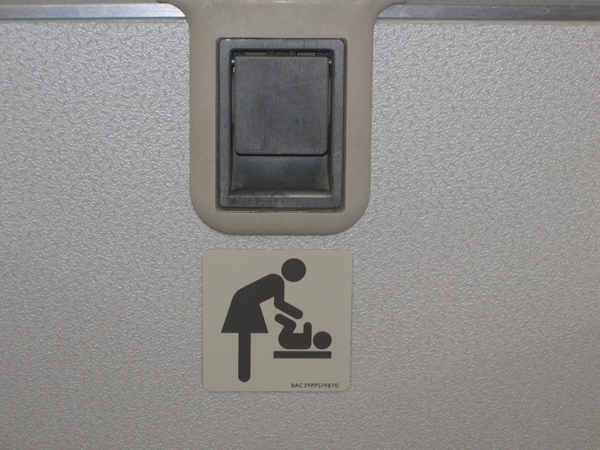 In this post I add another; instructions directed to riders of public transportation. In a recent post to the Material World blog entitled, “Feminist Technologies Are Assistive Technologies: What the Feminist Technology Movement Can Learn from the Disability Rights Movement,” I explain why alterations to public transport, initially designed for people with disabilities and later extended to pregnant women and passengers with small children, should be embraced as feminist technologies.  Here I address how these priority seating policies are conveyed to the public and conclude that this is a case of a feminist technology which is undermined by sexist graphics.

Given the multilingual, multicultural backgrounds of passengers, most public transport systems use pictograms or a combination of pictograms and text to designate reserved seats for people with special needs. In Vienna, and on some  local Japanese Railroad Lines, seats near the door are reserved for the elderly, the disabled, pregnant women and women traveling with young children. The pictograms in both cases are gendered. 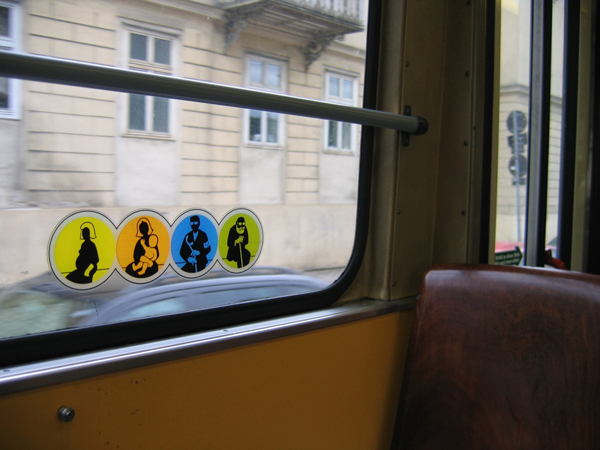 Women are pictured in the two reproductive roles and men in the two non-reproductive ones, even though, with the exception of being pregnant, all of the states pictured (being elderly, using assistive technologies, traveling with an infant) pertain to both men and women. In other words, all but the pregnant woman could have been represented by a gender-neutral human symbol, or by a man or a woman.

What are the gender politics of these choices?   One could say that the signs are gender-fair since equal numbers of women and men are pictured.  One could also argue that the image of a woman traveling with a baby should be lauded for representing reality, for crediting women with the work they do. But if the pictograms are meant to represent the sex of the people most likely to be in any of the four groups, one would need to also depict the elderly, since in Austria and Japan, as in the US, women represent a significantly larger proportion of the aged. Women are also more likely to have an ambulatory disability, in part, because of their longevity.*1

I believe the more convincing argument is that graphics inscribe sexist gender scripts. The depiction of the person caring for the child as woman should be condemned for reinforcing stereotypes, and in so doing making it harder for men to do this job comfortably, and harder for women to get men to do this job.

There are several alternatives. One is to use gender-neutral icons as done on Keio trains in Japan reserving priority seating for the same four categories of riders as in Austria, even for the pregnant woman. This is certainly preferable to the sexist-stereotype-reinforcing graphics pictured above. Although “gender-neutral” pictograms actually look identical to the icons used to represent men, such  icons leave open the possibility for both women and men to be imagined as occupying these roles.

An even better alternative, from my point of view, is to post multiple versions of the instructions with the sex of all but the pregnant woman changing.   These versions might keep the two and two ratio: e.g., one with men representing the elderly person and the child-minder and women representing the pregnant person and the person with a disability; another version with men occupying the disabled and child-minding categories; and women representing pregnancy and seniority. Or perhaps, some versions could have men representing all but the pregnant category; or women for all four categories. Creating multiple gendered alternatives would be similar to the strategy adopted by some feminist authors of systematically alternating the use of male and female pronouns in their writing (Madson and Shoda 2006). In both cases, the practice destabilizes established gender norms in ways that benefit women by conveying wider ranges of freedom from sex-restricted social roles. Unlike the gender-neutral icons, which allow the reader to bring her/his own stereotypes to the interpretation of the message, these sexually-explicit pictograms convey information about who occupies these roles;  information which may be at odds with the readers’ assumptions. It is this possibility which gives the proposed graphics their feminist potential as consciousness-altering technologies.*2  Variety would increase the likelihood that passengers would notice the signs.

Advertisers understand the huge potential that notices on public transportation hold for reaching and influencing people. As one English advertising company that specializes in reaching “consumers on the move” notes, the potential for reaching this “captive audience” is huge. Of the interior panels on London tubes they sell, they note, “With an average 13 minutes spent in carriage, Tube Car Panels offer advertisers the benefit of long dwell time… [which] ensure[s passengers]  have time to consider and attend to the content.”  The “dwell time” is even longer on buses.  The “5 billion bus journeys made in the UK last year” averaged 30 minutes, hence, offering “a large and receptive audience to communicate with.” This company also reports research finding which indicate advertisements on public transportation are “welcomed” by passengers, in comparison with advertisements on tv, for instance, presumably because of their potential to reduce boredom. These same affordances pertain when it comes to feminist actions.

Of course, it would be wonderful if we were able to get those, and all other, advertisements to convey feminist messages too. Doing so, however, seems a much more daunting challenge than making changes in official communications like the instructional signs discussed here. Furthermore, the authority of such official communications may make interventions in this area have particular merit.

Linda L. Layne is the Hale Professor of Humanities and Social Sciences and a professor of anthropology at Rensselaer Polytechnic Institute. She co-edited the book Feminist Technology.

*1 Statistics for Austria are from the UN Disability Statistics Compendium (1990).

In the US women report significantly higher rates of ambulatory disability.

*2 A similar effect was reported by Langdon Winner the first time he encountered a baby changing station in a men’s public restroom. His first assumption was that he had entered the women’s room accidentally (Winner 2002).