All Posts   »   Journal of Animal Ethics and the UK press 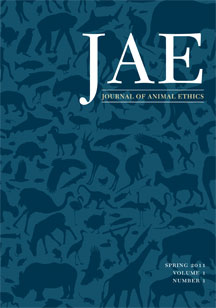 Last week, the following press release about the first issue of the Journal of Animal Ethics caught the attention of the UK press:

A call for a new “animal language” has been made by some of the world’s leading animal ethicists who say words like “pests” and “vermin” send out the wrong message and even our most common terms such as “pets” and “wild animals” need updating.

The editors of a new Journal of Animal Ethics (JAE) published this month by the University of Illinois Press say derogatory words like “pests” and “vermin” should be dropped altogether and “pets” replaced by “companion animals”, while “wild animals” should be termed “free living or free ranging animals”.

“Despite its prevalence, “pets” is surely a derogatory term both of the animals concerned and their human carers. Again the word “owners”, whilst technically correct in law, harks back to a previous age when animals were regarded as just that: property, machines or things to use without moral constraint …   In addition, we invite authors to use the words “free-living”, “free-ranging” or “free-roaming” rather than “wild animals”… For most, “wildness” is synonymous with uncivilized, unrestrained, barbarous existence. There is an obvious prejudgment here that should be avoided.”

“Our existing language about animals is the language of past thought — and the crucial point is that the past is littered with derogatory terminology: “brutes”, “beasts”, “bestial”, “critters”, “sub-humans”, and the like. We shall not be able to think clearly unless we discipline ourselves to use less than partial adjectives in our exploration of animals and our moral relations with them,” they argue.

The JAE has been launched by a US and UK academic partnership with the goal of widening international debate about the moral status of animals, and is the result of years of collaboration between the Oxford Centre for Animal Ethics and the University of Illinois Press.  It is edited by the internationally known theologian the Reverend Professor Andrew Linzey, Director of the Oxford Centre for Animal Ethics, and Professor Priscilla Cohn, Emeritus Professor of Philosophy at Penn State University and Associate Director of the Centre.

Multidisciplinary in nature and international in scope, the JAE covers theoretical and applied aspects of animal ethics that are of interest to academics from both the humanities and the sciences, as well as professionals working in the field of animal protection.

Link to the JAE subscription page.

Link to The Telegraph article.