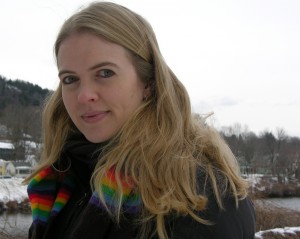 It’s great when I learn something about one of our recent books from a blog via a Google alert.

From littlegyroscopes:
Class: The origami pictures were pretty
Poet: They are poems
Class: But how can you read them?
Poet: What would you have to do to read them?
Class: (silence) I guess you’d have to unfold them
Poet: Right. And how are you going to unfold them?
Class: (silence) Would you make the origami yourself?
Poet: Right! Yes! And then?
Class: Write the letters on the bird the way it shows in the pictures?
Poet: Right! And then?
Class: And then you’d unfold it and read the poem
Poet: Exactly! My point with the origami poems was, in part, that as a reader, you only get a limited part of the poem, only the surface level of any text is available if you don’t engage with it, turn it over and touch it.  You have to be curious enough about the poems to take the effort to physically make the shape, copy down the writing, unfold it and read it.  But once you do that, it’s like you’ve found your own secret little hidden poem. It’s almost like you wrote it yourself, but in a language you didn’t quite understand until you’d finished.  Art is supposed to be interacted with, touched, poked, folded… sometimes you have to get in and do it yourself or it won’t make any sense at all.”