Since 2011 Vijay Shah has been the Acquiring Editor for the University of Illinois Press series The Asian American Experience. In Spring 2013 the first books that he acquired for the series will be published. Vijay took a few minutes to answer questions about the series.

Q: In March 2013 the Press will publish Shilpa Davé’s book Indian Accents: Brown Voice and Racial Performance in American Television and Film.  It will be the first book that you acquired for the series to be released.  How did you discover this manuscript?

Vijay: I discovered Indian Accents with the help of our then senior editor Kendra Boileau (now Editor-in-Chief at Penn State University Press). We collaborated with our new series’ editor Jigna Desai, who knew the author and thus sought out the project. I believe this first book in the series will turn out as a breakthrough in media and ethnic studies!

Q: What is different about Davé’s approach?

Vijay: Davé introduces the new concept of “brown voice,” as analogous to blackface, to describe racial impersonations of accents in mainstream film and television. Apu from The Simpsons seems a prime example, since the immigrant character’s voice is performed by a non-South Asian. Beyond racialization based on visual appearance, Davé suggests the profound implications of voice on ethnicity, national identity, and belonging in America.

Q: Are we at a time when Asian American voices are staking out a new place in American culture?

Vijay: To some extent, I believe so. Amid the increasing diversity of the United States, Asian Americans are asserting their voices. For instance, Mindy Kaling has begun her own t.v. show, the very first for a South Asian actor. So Asian Americans are beginning to represent themselves in American culture at large.

Q: Following Indian Accents in April 2013 are Yellow Power, Yellow Soul: The Radical Art of Fred Ho and Fighting from a Distance: How Filipino Exiles Helped Topple a Dictator.  How do these three books together signal a new direction for the series? 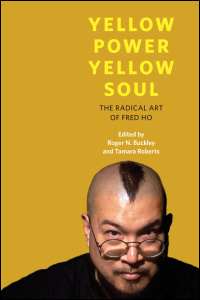 Q: What are some of the barriers that Fred Ho crosses with his work?

Vijay: Fred Ho stands out as the first artist to combine Chinese opera and African-American music, creativity that simply amazes me! How does someone even think of such a rare combination? As an activist, Ho fuses many of his compositions with melodies from Asian and African music, bringing these various peoples together.

Q: Does the interdisciplinary direction take the series in unexpected places?

Vijay: In some respects, it does, crossing over into television, film, music, art, and activism. I also take an interest in Asian Americans in the Midwest, a little unexplored region in the field.

Q: How do you collaborate with the series’ editorial board to attract, evaluate, and acquire new books?

Vijay: As with Indian Accents, sometimes the series’ editors bring projects to my attention. Otherwise, I meet authors at conferences or receive proposals through the post, such as Fighting from a Distance, a first-hand account of Filipino-American resistance to Marcos’ dictatorship. In these cases, I consult the expertise of the series’ board in Asian-American studies. I really enjoy collaborating with such dynamic movers and shakers in their field!

Q: So Fighting from a Distance came unsolicited?  Is that rare?

Vijay: Yes, it came in through the post unsolicited, which happens now and then with books. I just became so captivated with the dramatic account of a bunch of Filipino
immigrants who land in the United States and then discover that their homeland is on fire! An activist in the opposition himself, the author Jose Fuentecilla gives us a ringside seat to the overseas arm of the resistance that helped overthrow a dictator half way around the world.

Q:  What are the next books coming in the series?

Vijay: In the autumn, we are publishing a groundbreaking collection on Asian Americans in the South, opening up another region outside of the usual Atlantic and Pacific coasts. In addition, we are bringing forth Undercover Asian, LeiLani Nishime’s perceptive study of multiracial Asian Americans in visual culture, which interprets certain images of Keanu Reeves and Kimora Lee Simmons. Both autumnal books will really build upon the debuts in the spring.