All Posts   »   Results not Typical by Brian 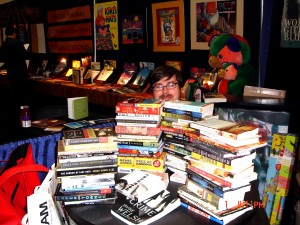 Hello. I’m a first time BEA — BookExpo America — attendee. I need to get a couple of things out of the way. First, I am not a publisher, bookseller, librarian or anything else that would bring me on official business to BEA 2008. Yet, there I was on the floor of the LA Convention Center. I attended the Expo as nothing more than a reader. Second, I’ve dreamt of BEA for years, reading about it in the newspaper or catching an author panel on C-Span 2. Rows upon rows of publishers handing out advance readers copies (ARCs) of books that won’t be available in stores for months. It’s a reader’s paradise.

The day before we left for LA, a terrible thought entered my mind: what if BEA didn’t live up to my idea of it? The minute I hit the convention floor, those fears were quickly dispelled. The South Hall, with all its spectacularly designed and lighted booths, looked like Times Square, if Times Square only advertised books. One of the first things that caught my eye was the gigantic Batman banner hanging by the DC Comics booth. As a huge fan of The Dark Knight, I took this as a good omen.

The number of publishers at the Expo was staggering. There were big houses like Random House, Simon & Schuster, etc. There were smaller presses like Softskull, Coffeehouse Press and Small Beer Press. Of course there were the university presses. There were also the tiny publishers like Manic D. Books were put out at varying intervals throughout the day. If you wanted a specific book, you would have to make multiple trips to get the advertised ARCs. I was on the hunt. I had a list of books to obtain and I had every intention of succeeding. I got all the books, except for two, and in the end my haul ended up surpassing my expectations.

There were many lines to stand in at BEA. Friendships were formed in an instant in these lines — the desire for a tote bag or author’s autograph being the connective tissue that allowed people to divulge family information and work histories to a complete stranger. One woman referred to herself as the aunt I never knew because I had saved her place in line while she went to go pick up an ARC at a neighboring booth. These relationships ended as soon as the line dispersed.

Here are some tips for any future BEA attendees:

1. Be prepared to walk. A lot. However much you think you’ll walk, double it. BEA took up two huge convention center halls that were on opposite ends of the building. The only place to sit, if you’re an attendee, was in the food court, and seating was at a premium.

2. Train. Tote bags stuffed with books can be hard on the body. I suggest strength training that focuses on the lower back, abs, and shoulders. A little arm work won’t hurt either for when you have to push your way through the crowd waiting to get an autograph from Alec Baldwin or William Shatner. Yes, there were a lot of movie and TV celebrities promoting their books at BEA.

3. Remember, you’ll need your strength. BEA is exhausting, in the best way possible if there is such a thing, so you’ll need to stay hydrated. Carry around a snack to help you get through the post-lunch energy lull.

BEA was a blast.  But, I suspect only a true book dork would say this.

Brian is an MFA, fiction, candidate at the University of Illinois, Urbana-Champaign. He is pictured above behind his piles of goodies.