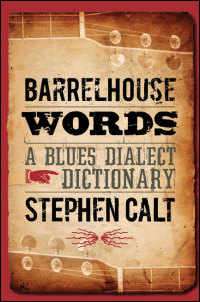 We received the sad news, confirmed this week, that Stephen Calt passed away earlier this month.  Stephen authored the recent University of Illinois Press title Barrelhouse Words: A Blues Dialect Dictionary, which received this high praise in the Wall Street Journal: “An impeccably scholarly, irresistibly readable guide to the language heard on the recordings of the great blues singers who were active in the first half of the twentieth century.”

A few of the recent online notices including About.com suggest that Stephen wasn’t interested in The Blues in recent years.

“While it has been reported that Calt turned away from the blues late in life, his was an important voice in the ongoing attempt to place blues music in a proper context as a uniquely American art form.”

I can confirm this. When I arranged a recent interview with BBC Radio 6, he said that he only felt qualified to speak about the content of Barrelhouse Words and was no longer interested in Blues music.

Nevertheless, he was easy to work with and I’ll miss his calls inquiring about the progress of the book.

The Press’ sympathies go out to his family and friends.