All Posts   »   Q&A with Child Care in Black & White author Jessie B. Ramey 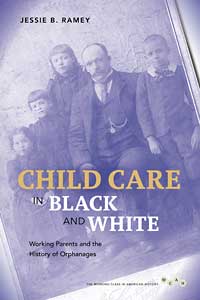 Jessie B. Ramey is an ACLS New Faculty Fellow in Women’s Studies and History at the University of Pittsburgh. Her study, Childcare in Black and White: Working Parents and the History of Orphanages, published by the University of Illinois Press on April 30, 2012, received the John Heinz Award from the National Academy of Social Insurance, the Lerner-Scott Prize in women’s history from the Organization of American Historians, and the Herbert G. Gutman Prize from the Labor and Working-Class History Association. Dr. Ramey answered our questions about her acclaimed book.

Q:  Why did you choose the United Presbyterian Orphan’s Home and the Home for Colored Children as the focus of your book?

Ramey:  I launched this project hoping to learn more about African-American child welfare efforts, about which we really know very little. When I found the Home for Colored Children – and then discovered its white “sister” orphanage, started by the very same person – I knew that I was onto a story. The two organizations are still around today, now serving troubled teens, and key for me as a historian, both still had their records. These are amazing collections that allowed me to do an in-depth comparative analysis of black and white childcare at the turn of the last century. The book is a case study of these two orphanages that reflect the larger, national story of race, gender, and class relationships underlying the development of our child welfare systems.

Q:  The phrase “Child Care” is in the title of your book and the word “Orphanages” is in the subtitle.  Were the children’s homes run like traditional orphanages or more similar to present-day daycare systems?

Ramey:  When these two orphanages were founded in 1878 and 1880, working parents had very few options if they needed help taking care of their children. There were “day nurseries,” one of the ancestors of modern daycare, but if they didn’t have friends and
family they could count on, parents were far more likely to turn to orphanages for their childcare needs. The book is really the story of how working parents – often widows or widowers in a crisis – strategically used the institutions as a temporary means of childcare while they re-stabilized their families. In this sense, I am reconceptualizing orphanages as childcare and locating the historical roots of modern daycare.

Q: How did race influence the differences between these two institutions?

Ramey:  Race played a key role in the development of these institutions. Understanding race as a relationship of power helps us to see the ways in which the (mostly) white
founders of both orphanages envisioned their work and interacted with parents, children, donors, reformers, and the broader community. Quantitative analysis of the records of over 1,500 children also allows me to precisely show the different ways in which black and white families used the orphanages, from children’s length of stay, to sibling placement patterns, use of foster homes, and dismissal outcomes. In nearly every quantifiable way, the data suggest how much more vulnerable African American families were to the ravages of modern industrial capitalism. But the data also reveal incredible family strength and
resilience.

Q:  What were some of the jobs of the parents who used these homes?

Ramey:  The mothers and fathers who placed their children in these orphanages were typically working class – not necessarily impoverished, but working hard to make ends meet. But it didn’t take much to tip a family into crisis, and many families faced overlapping crises: the death of a spouse, ill health, lack of adequate housing, the loss of a job, and so on. Race and gender affected employment options, with African-American women relegated largely to domestic positions and African-American men struggling at the bottom rungs of the industrial economy. White men’s employment ranged from laborers and farm hands to more skilled positions in the mills and occupations such as coopers, tinsmiths, and shopkeepers.

Q:  How long on average would children stay there?

Ramey:  Race and gender (of both the parent and child) also affected how long children stayed in the orphanages. On average, white parents were able to retrieve their children
after about a year. It generally took African-American parents just over two years before reuniting with their children. In the end, the majority of children went back home to their families.

Q:  Who were the people that ran these institutions?

Ramey:  The Rev. James Fulton founded the two orphanages, with significant contributions from his wife, Mary Fulton, and a number of other women. The institutions were actually run by two separate Christian women’s groups: the United Presbyterian Women’s Association of North America (UPWANA) managed the United Presbyterian Orphan’s Home and the Women’s Christian Association (WCA) managed the Home for Colored Children. The WCA was the foremother of the YWCA movement in Pittsburgh.
Surprisingly, the board of directors at both orphanages included working-class women. And the Home for Colored Children board included African-American women from its very inception, making it an early example of interracial cooperation in the field of social welfare. These women worked extremely hard and were intimately involved in the day-to-day operations of the institutions, some putting in what we would consider full-time hours.

Q:  How many children would be in the homes, at any given time?

Ramey:  The orphanages were nearly always brimming with children, often 50, 60 or more. In the early years, this meant several children would be sharing a single bed. The
institutions had long waiting lists and often had to turn families away or force them to wait months before admitting their children.

Q:  Who are the people in the image on the book’s cover?

Ramey:  In one of the most remarkable moments during my research, I discovered that my great-great grandfather, James Caldwell, had placed his children in the United Presbyterian Orphan’s Home after his wife, Jessie, died in childbirth. Knowing the outcome of that particular story gave me insight into how families were using these
institutions for their own purposes and allowed me to start thinking about them as childcare. It was a key turning point in the project. The photo shows Caldwell with four of his children just after he had placed them in the orphanage, around 1891.