Stephen Wade: Banjo Diary and The Beautiful Music All Around Us In September 2012 musician and author Stephen Wade will simultaneously publish his latest projects:  an hour-long CD titled Banjo Diary: Lessons from Tradition (Smithsonian Folkways) and the book The Beautiful Music All Around Us: Field Recordings and the American Experience (University of Illinois Press).  A headlining concert tour will coincide with their release. These narrated, multimedia, musical stage performances feature Stephen Wade with veteran instrumentalists and singers Mike Craver, Danny Knicely, James Leva, and Zan McLeod.

The concerts bring together two endeavors, deeply entwined both historically and personally. Stephen’s Banjo Diary: Lessons from Tradition takes its inspiration from the very recordings explored in his book The Beautiful Music All Around Us. The stories there, like the sources for this album, foreground the music against its backdrop in life.

Links to the book and event schedule are below. 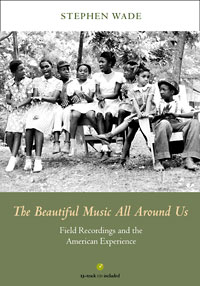 The Beautiful Music All Around Us: Field Recordings and the American Experience (University of Illinois Press) takes as its starting point thirteen iconic performances captured on Library of Congress field recordings between 1934 and 1942 in locations reaching from Southern Appalachia to the Mississippi Delta and onto the Great Plains. Through decades of research and detective work, musician Stephen Wade tracked down surviving performers and their families, fellow musicians, and community members. Weaving together loving and expert profiles of these performers with the histories of these songs and tunes, Stephen brings to life largely unheralded individuals—farm laborers, state prisoners, school children, cowboys, housewives and mothers, loggers and miners—whose music has become part of the wider American musical soundscape. By exploring how these singers and instrumentalists exerted their own creativity on inherited forms, “amplifying tradition’s gifts,” Stephen shows how a single artist can make a difference within a democracy.

Book trailer for The Beautiful Music All Around Us: Field Recordings and the American Experience.