All Posts   »   Q&A with Lisa Phillips, author of A Renegade Union 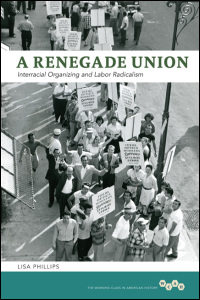 Lisa Phillips is an assistant professor of history at Indiana State University.  She answered our questions about her new book A Renegade Union: Interracial Organizing and Labor Radicalism.

Q: What is the “renegade union” of the book’s title?

Q: What was the biggest problem the union faced in organizing its workers?

Phillips: Fitting in within the larger labor movement. It always held great appeal to the workers it organized but had to organize so differently from other labor unions that an
almost constant tension existed between it and the larger labor organizations with which it attempted to affiliate.

Q: Is there something about New York City–vs. other large cities like Chicago, Philadelphia, etc.–that made the creation of this union possible?

Phillips: New York, especially Manhattan where the union’s organizers started, wasn’t a manufacturing or meatpacking center like Detroit or Chicago. New York’s businesses and shops were relatively small and diverse compared to big auto or steel plants more typically associated with union organizing in the mid 20th century. That meant that District 65’s organizers had to develop different strategies to pull in the people it organized.  Not only were they incredibly low paid, they worked in small 10-15 person shops and warehouses.  Some packed merchandise, everything from clothes to toys to costume jewelry. Others worked in wholesale shops stocking merchandise and doing other odd jobs. Few worked for the same “boss,” in the same warehouse, or in the same industry but they all faced similarly degrading work conditions and within a few blocks of one another and that’s what the union’s organizers were able to tap into.

Q: How many people were in the union at its peak?

Q: Did it eventually join forces with a larger union organization?

Phillips: Yes, it was affiliated through most of its history with the Retail, Wholesale, and Department Store Union (RWDSU) which was an AFL-CIO union.

Q: Was there anything unique about District 65 that still makes an impact today?

Phillips: Its history is key to understanding how labor organizers work today in a service and distribution-oriented economy. There are more and more people working in small retail and wholesale establishments and in warehouses in the service and distribution industries than there are people working in large manufacturing-based settings so the union’s strategies are incredibly instructive for what’s happening today with American workers.

Phillips: It was fascinating to learn about how people from such different backgrounds (men, women, black, white, Puerto Rican, Jewish, Italian) and working for different people could create a sense of camaraderie and come together to try and pressure their bosses to improve their working conditions. They didn’t have strength in numbers the way auto workers did to shut the plant down and walk out. They didn’t have a common “boss” to despise. None of that but a collective sense of pushing their “collective” employers to improve conditions in the whole of segment of the industry in which they worked. What an undertaking!