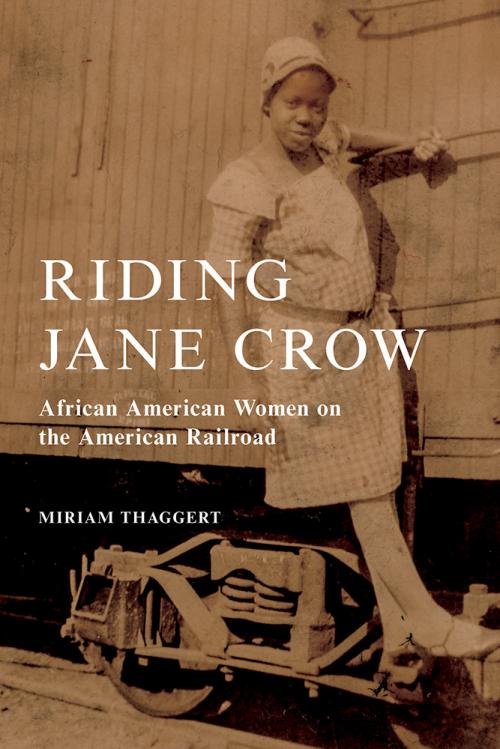 Miriam Thaggert illuminates the stories of African American women as passengers and as workers on the nineteenth- and early-twentieth-century railroad.

As Jim Crow laws became more prevalent and forced Black Americans to "ride Jim Crow" on the rails, the train compartment became a contested space of leisure and work. Riding Jane Crow examines four instances of Black female railroad travel: the travel narratives of Black female intellectuals such as Anna Julia Cooper and Mary Church Terrell; Black middle-class women who sued to ride in first class "ladies’ cars"; Black women railroad food vendors; and Black maids on Pullman trains. Thaggert argues that the railroad represented a technological advancement that was entwined with African American attempts to secure social progress. Black women's experiences on or near the railroad illustrate how American technological progress has often meant their ejection or displacement; thus, it is the Black woman who most fully measures the success of American freedom and privilege, or "progress," through her travel experiences.

* Publication of this book was supported by a grant from Furthermore: a program of the J. M. Kaplan Fund.

Miriam Thaggert is an associate professor of English at SUNY Buffalo and the author of Images of Black Modernism: Verbal and Visual Strategies of the Harlem Renaissance.

"Riding Jane Crow is a must-read for anyone interested in the life of the train in American history, and especially the racial underpinnings that are less frequently the topic of its story. But the book also represents the undertaking of an astonishing scholar, furnishing hundreds of primary sources by which the reader can and should continue to educate themselves on the topic. While Thaggert expertly toes the line between her voice and those that are not her own, she takes care to present those voices with grace, genuine curiosity, and above all, historical import." --Pilgrim House

"This extremely well written scholarly work addresses the fact that much of the history of Black Americans has been tied to their inability to freely move about the nation." --Library Journal, starred review

"In this well-researched and accessible volume, Miriam Thaggert explores the little-known histories of railroads and Black women, as passengers, food vendors and maids." --Ms. Magazine

"Riding Jane Crow brilliantly explores the experiences of Black women as passengers and workers on trains in post-Reconstruction America. This meticulously researched and well-written book takes the reader on a powerful journey that unveils the intricacies of race, gender, and class in travel history."--Keisha N. Blain, coeditor of the No. 1 New York Times bestseller 400 Souls and award-winning author of Set the World on Fire: Black Nationalist Women and the Global Struggle for Freedom

"Over the long twentieth century, black women navigated the gendered, sexualized, racialized hierarchies of American railroads, producing something new in American cultural history, a counter-story of Black female railroad history. With meticulous and creative archival research, Thaggert tells the story of Black female fugitive slaves, Black Pullman maids, Black female food vendors, and elite Black women travelers, who challenged the violence and humiliations of race and gendered train spaces and even, in some instances, secured their constitutional right to freedom and mobility."--Mary Helen Washington, author of The Other Blacklist: The African American Literary and Cultural Left of the 1950s

“This well-argued, expansively researched book completely and powerfully reframes our understanding of the American railroad through the eyes of previously overlooked Black women travelers and workers on the rails. The racialized politics of rail travel that this book so deftly illumines has given me new appreciation for the harrowing journeys of the Black women reformers and laborers who showed us that it was not the building of trains or the laying of thousands miles of track, but rather the choice to treat or not treat the Black women riding those trains with dignity, that mark the limits and possibilities of American progress.” –Brittney Cooper, author of New York Times bestseller Eloquent Rage: A Black Feminist Discovers Her Superpower and award-winning author of Beyond Respectability: The Intellectual Thought of Race Women