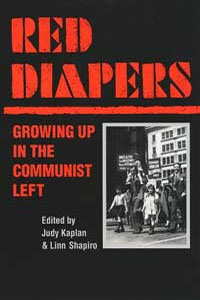 Red Diapers is the first anthology of autobiographical writings by the children of American communists. These memoirs, short stories, and poems reflect the joys and perils of growing up in a subculture defined by its opposition to some of society's most deeply held values. How red diaper babies have come to terms with their political inheritance is the theme of this compelling anthology.

Some contributors have fond memories of family activism; others recall the past with ambivalence or even pain. The authors range in age from their twenties to their eighties. Some, such as Watergate reporter Carl Bernstein and sixties activist Bettina Aptheker, are widely known themselves; some are the children of well-known American leftists, including Jeff Lawson, son of blacklisted screenwriter John Howard Lawson, and Robert Meeropol, son of Ethel and Julius Rosenberg. In disparate voices, the contributors elaborate on how their parents attempted to pass on to them the torch of radical politics.

"A remarkable collective memoir. . . . It bears witness to a powerful tradition of radical 'family values' from which emerged a generation of leftist organizers who have made an indelible mark on U.S. social movements. Perhaps most importantly, this wonderful volume demystifies the process of radicalization by foregrounding the humanity of those of us whose family legacies have been defined by radicalism." -- Angela Y. Davis

"Each of nearly fifty stories has its own special features. My favorite is by Sharon Temple Lieberman, whose mother wrote a poem to FDR and changed it to Lenin in order to get it published in the New Masses, and whose father bought a new Cadillac to show prospective clients that his law practice was unimpaired by his televised appearance as an unfriendly HUAC witness."
-- Ring Lardner, Jr.

"I recommend this book to any young person curious about people in the twentieth-century U.S.A. who called themselves communists. It's a diverse lot of intimate recollections, more reliable than the academic or political generalities we've heard for years. Lots of contradictions and tangles." -- Pete Seeger

"These are fascinating glimpses of the lives of a special group of people, poignant and thought-provoking--an important contribution to the social history of our time."
-- Howard Zinn