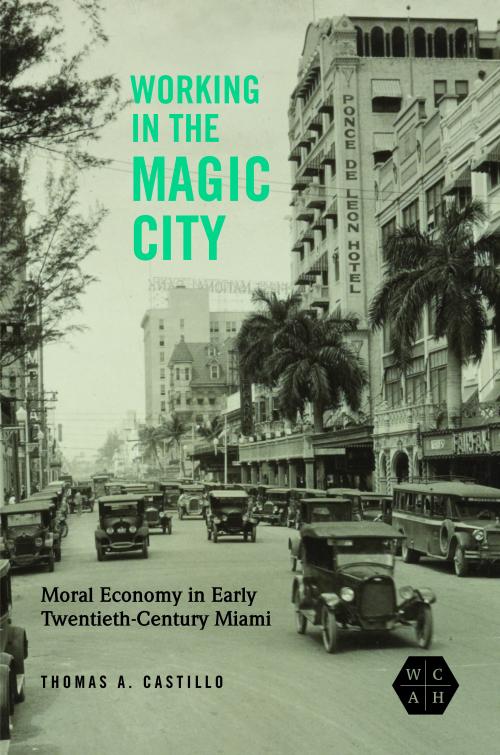 Working in the Magic City

In the early twentieth century, Miami cultivated an image of itself as a destination for leisure and sunshine free from labor strife. Thomas A. Castillo unpacks this idea of class harmony and the language that articulated its presence by delving into the conflicts, repression, and progressive grassroots politics of the time. Castillo pays particular attention to how class and race relations reflected and reinforced the nature of power in Miami. Class harmony argued against the existence of labor conflict, but in reality obscured how workers struggled within the city's service-oriented seasonal economy. Castillo shows how and why such an ideal thrived in Miami’s atmosphere of growth and boosterism and amidst the political economy of tourism. His analysis also presents class harmony as a theoretical framework that broadens our definitions of class conflict and class consciousness.

Thomas A. Castillo is an assistant professor of history at Coastal Carolina University.

"The superficial sheen of Miami as a purely seasonal 'winter playground' for the well-to-do obscures the city’s rich and long-standing quotidian working-class history dating back to the early twentieth century. Few scholars have done more than Castillo to pull back the curtain on the lives and aspirations of the multiracial class of chauffeurs, construction workers, transient laborers, and care and service workers who helped make Miami what it was--and what it is today. Based on an unprecedented mining of long-neglected archives and local newspapers from the first half of the last century, Working in the Magic City offers a major exposure of the deep layers--and fault lines--of labor and urban history of one of the most poorly understood and understudied transnational urban conglomerations in the contemporary world. What once seemed Miami’s anomaly--an urban economy based primarily on low-wage service work and seasonal precarity--now appears to define capitalist modernity."--Alex Lichtenstein, author of Twice the Work of Free Labor: The Political Economy of Convict Labor in the New South

"Thomas Castillo has rendered one of America's premier cities of leisure a city of labor. Contradicting more than a century of booster propaganda, Working in the Magic City reveals Miami's rich and complex history of class conflict. Even more impressively, it arms today's readers with a powerful parable about the frailty and preciousness of interracial, working-class organizing, dare one dream, class harmony."--N. D. B. Connolly, author of A World More Concrete: Real Estate and the Remaking of Jim Crow South Florida