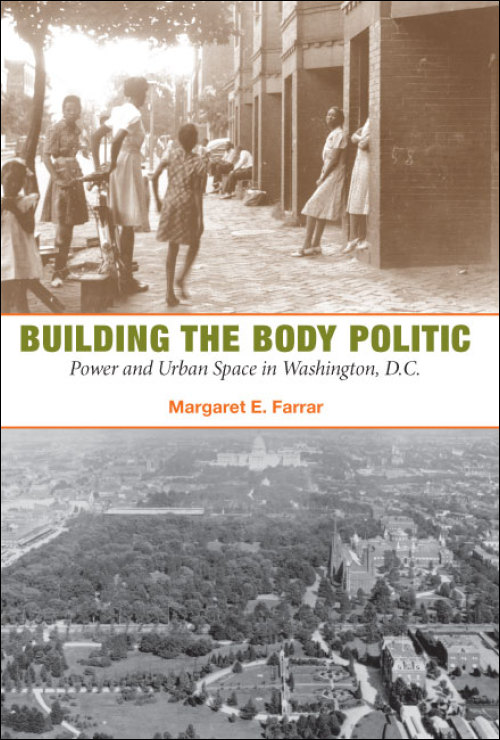 Building the Body Politic demonstrates how the language of urban planning shapes political imagination, and limits the possibilities for change available to cities and citizens. The book represents three key moments in Washington, D.C., planning history that offer rich insight into changing ideas about cities, citizens, and politics: alley and tenement reform and the Senate Park Commission Plan for re-shaping the Washington Mall (1900); urban renewal and the District of Columbia Redevelopment Act (1950-60); and the implementation of a citywide surveillance system and the Monuments and Memorials Master Plan (2001). Margaret E. Farrar expertly draws from political theory, cultural geography, and urban studies in her examination of the relationships among spaces, citizens, and power in the context of planning Washington.

In addition to the realities of Washington's built environment, Farrar describes the role of a capital city in a democracy. More than any other place, a principal function of the architecture and design of a capital city is to create citizens. In doing so, some groups and interests are legitimized, while others are rendered irrational, illegitimate, or often quite literally out of place. In carefully tracing shifting urban planning vocabularies over the course of the twentieth century, Farrar offers valuable insight into how power is conveyed, deployed, consolidated, and negotiated through language.

"Farrar takes us on a fascinating tour of Washington, D.C., in the twentieth century, beginning with efforts to script American ideals into new spaces on the Mall, while simultaneously trying to 'purify' the infamous alleys of the city, and ending with a captivating discussion of the spatial politics of 'hyper-memorialization' and a perceptive exploration of what a more democratic approach toward space might demand of us. The reader's next visit to our nation's capital will be a far richer, more reflective one than the last. A very intelligent book."--Stephen K. White, author of Sustaining Affirmation: The Strengths of Weak Ontology in Political Theory

"Building the Body Politic makes creative use of literature that has grown around the politics of space and the body and addresses geographers, sociologists, political scientists, anthropologists, historians, and urban planners alike. This innovative and original study deals with three important moments in Washington, D.C., history to illustrate that by building spaces, we mold the citizens who inhabit them."--Engin Isin, author of Being Political: Genealogies of Citizenship