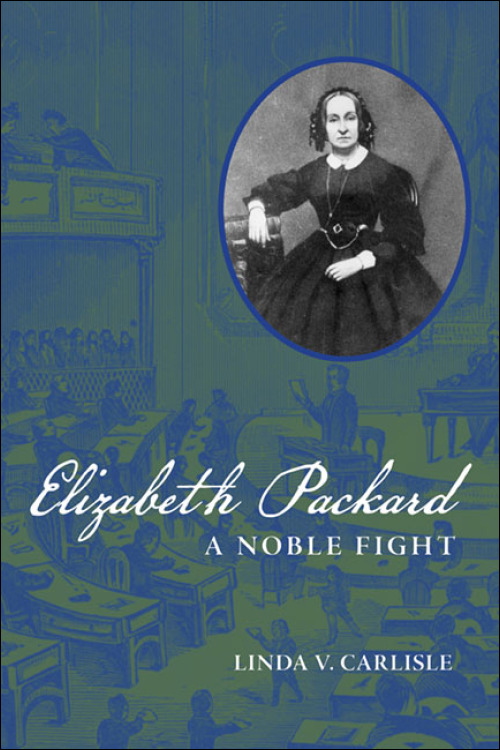 Elizabeth Packard's story is one of courage and accomplishment in the face of injustice and heartbreak. In 1860, her husband, a strong-willed Calvinist minister, committed her to an Illinois insane asylum in an effort to protect their six children and his church from what he considered her heretical religious ideas.

Upon her release three years later (as her husband sought to return her to an asylum), Packard obtained a jury trial and was declared sane. Before the trial ended, however, her husband sold their home and left for Massachusetts with their young children and her personal property. His actions were perfectly legal under Illinois and Massachusetts law; Packard had no legal recourse by which to recover her children and property.

This experience in the legal system, along with her experience as an asylum patient, launched Packard into a career as an advocate for the civil rights of married women and the mentally ill. She wrote numerous books and lobbied legislatures literally from coast to coast advocating more stringent commitment laws, protections for the rights of asylum patients, and laws to give married women equal rights in matters of child custody, property, and earnings. Despite strong opposition from the psychiatric community, Packard's laws were passed in state after state, with lasting impact on commitment and care of the mentally ill in the United States.

Packard's life demonstrates how dissonant streams of American social and intellectual history led to conflict between the freethinking Packard, her Calvinist husband, her asylum doctor, and America's fledgling psychiatric profession. It is this conflict--along with her personal battle to transcend the stigma of insanity and regain custody of her children--that makes Elizabeth Packard's story both forceful and compelling.

"This engaging book shows the fluid nature of what constitutes mental illness, and the evolving role of women in the household."--History of Psychiatry

"Linda Carlisle's comprehensive history makes a significant contribution to the field of psychiatry and the study of women's rights. Using a large mass of primary sources that hitherto remained unexamined, Carlisle sheds a great deal of light on the life of an individual who has not been taken seriously in much of the historical literature--until now."--Gerald N. Grob, Henry E. Sigerist Professor of the History of Medicine Emeritus, Rutgers University