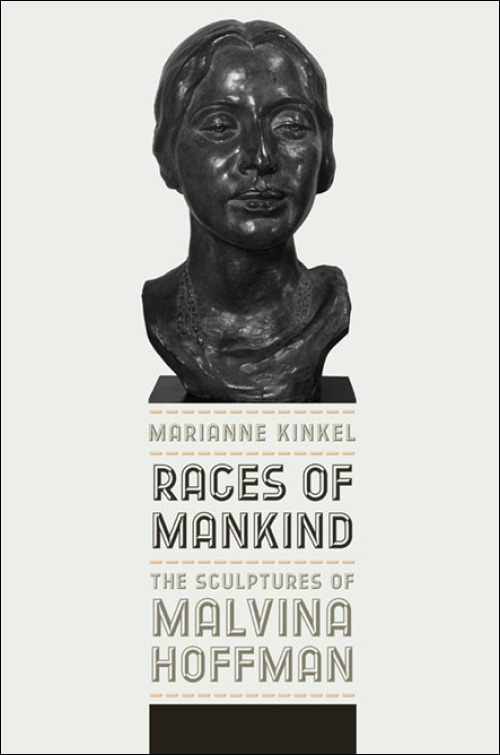 In 1930, Chicago's Field Museum of Natural History commissioned sculptor Malvina Hoffman to produce three-dimensional models of racial types for an anthropology display called The Races of Mankind. Marianne Kinkel’s cultural biography of the long-running exhibition measures how Hoffman’s ninety-one bronze and stone sculptures impacted perceptions of race in twentieth-century visual culture. Kinkel looks at how Hoffman's collaborations with curators and anthropologists transformed the commission from a traditional physical anthropology display into a fine art exhibit. She also tracks appearances of statuettes of the works in New York and Paris exhibitions and looks at how publishers used images of the sculptures to illustrate atlases, maps, and encyclopedias. The volume concludes with the dismantling of the exhibit in 1969 and the Field Museum’s redeployment of some of the sculptures in new educational settings.

A fascinating cultural history, Races of Mankind examines how we continually re-negotiate the veracity of race through collaborative processes involved in the production, display, and circulation of visual representations.

Marianne Kinkel is an associate professor of art history at Washington State University.

"A provocative new study. . . . Kinkel shows how the images contributed to a contentious and mutating discourse on race through the end of the twentieth century."Art in America

"Covers every detail concerning Malvina Hoffman'sRaces of Mankind--from the artist's career through her extensive preparation to the creation of work and its reception. . . . Recommended"--Choice

"'Races of Mankind' staged some strange scenes from a marriage of arts and anthropology."--Journal of the Royal Anthropological Institute

"Elegantly written and eminently readable, this work deals with an important and very current topic: the history of the social construction of race. Through the case study of Malvina Hoffman's Races of Mankind sculptures, Marianne Kinkel gives us a compelling example of how race has been imaged in art and in museum displays."--Mary Jo Arnoldi, curator of African ethnology and arts at the National Museum of Natural History, Smithsonian Institution

"Sculpture, by virtue of its intimate connection with the human body, was given an authoritative place in the history of racial science, and Hoffman's project is perhaps the single most important example of that peculiar intersection of art and science. This is a fascinating study that reveals much about the persistence and contradictions of racial science in its final phase before genetics would transform biology and demolish race as a scientifically viable category."--Kirk Savage, author of Standing Soldiers, Kneeling Slaves: Race, War, and Monument in Nineteenth-Century America