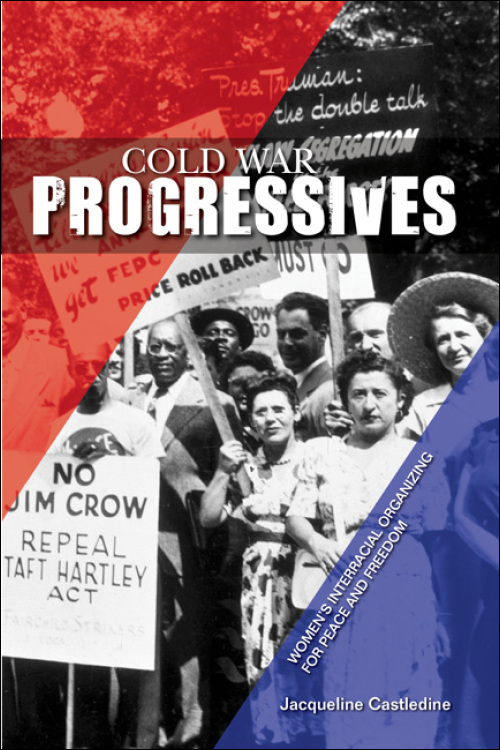 In recognizing the relation between gender, race, and class oppression, American women of the postwar Progressive Party made the claim that peace required not merely the absence of violence, but also the presence of social and political equality. For progressive women, peace was the essential thread that connected the various aspects of their activist agendas. This study maps the routes taken by postwar popular-front women activists into peace and freedom movements of the 1960s and 1970s. Historian Jacqueline Castledine tells the story of their decades-long effort to keep their intertwined social and political causes from unraveling and to maintain the connections among peace, feminism, and racial equality.

Postwar progressive women and their allies often saw themselves as members of a popular front promoting the rights of workers, women, and African Americans under the banner of peace. However, the Cold War indelibly shaped the contours of their activism. Following the Progressive Party's demise in the 1950s, these activists reentered social and political movements in the early 1960s and met the inescapable reality that their agenda was a casualty of the left-liberal political division of the early Cold War era. Many Americans now viewed peace as a leftist concern associated with Soviet sympathizers and civil rights as the favored cause of liberals. Faced with the dilemma of working to reunite these movements or choosing between them, some progressive women chose to lead such New Left organizations as the Jeannette Rankin Brigade while others became leaders of liberal "second wave" feminist movements.

Whether they committed to affiliating with groups that emphasized one issue over others or attempted to found groups with broad popular-front type agendas, Progressive women brought to their later work an understanding of how race, class, and gender intersect in women's organizing. These women's stories demonstrate that the ultimate result of Cold War–era McCarthyism was not the defeat of women's activism, but rather its reconfiguration.

Jacqueline Castledine is a member of the core faculty in the University Without Walls at the University of Massachusetts, Amherst, and director of historical programs for the Valley Women's History Collaborative of Western Massachusetts. She is coeditor of Breaking the Wave: Women's Political and Public Activism, 1945–1990.

"Cold War Progressives offers an engaging and accessible chronicle of women's experiences within the Progressive Party, their contributions to postwar left politics, and their legacy to the movements of the 1960s and 1970s. It is well researched, making use of interviews and the archives of numerous women Progressives to bring to life the personal and political lives of these activists."--H-Net Reviews

"Remarkably well researched. Castledine has given us the first full-fledged history of what was arguably some of the most innovative interracial organizing in Progressive-era and postwar American history."--American Historical Review

"Cold War Progressives provides a lively introduction to the diverse constituency of a postwar Popular Front along with much-appreciated biographies of many progressive female activists."--The Journal of American History

"Castledine accounts for the impact of McCarthyism on the lives of women engaged in progressive activism. Castledine's thoroughly documented interpretation of their struggle explains the present understanding of leftist women's Cold War era activism. This highly readable and important book reminds us of the difficulties early feminists faced as they sought equality in American society."--Rhetoric & Public Affairs

"Castledine has dug deeply into multiple archives to bring many lesser-known progressive women who were actively engaged in one or more activist groups. The research is impressive and the results illuminating."--The Historian

"Cold War Progressives adroitly interweaves many themes of leftist activism, including feminism, civil rights, labor, communism, and peace, all under the same heading of women's struggle for a political voice. I don't know of any other book that brings together these themes in one study."--Erika Kuhlman, author of Of Little Comfort: War Widows, Fallen Soldiers, and the Remaking of the Nation After the Great War

"This study makes a vital contribution not only to women's history, but also post–World War II political history and the history of social movements and the left. Mini-biographies of more than a dozen key activists bring these women to life and explain their commitments to peace and equality. A must-read for scholars of modern U.S. history, women's history, and African American history."--Susan M. Hartmann, author of The Other Feminists: Activists in the Liberal Establishment