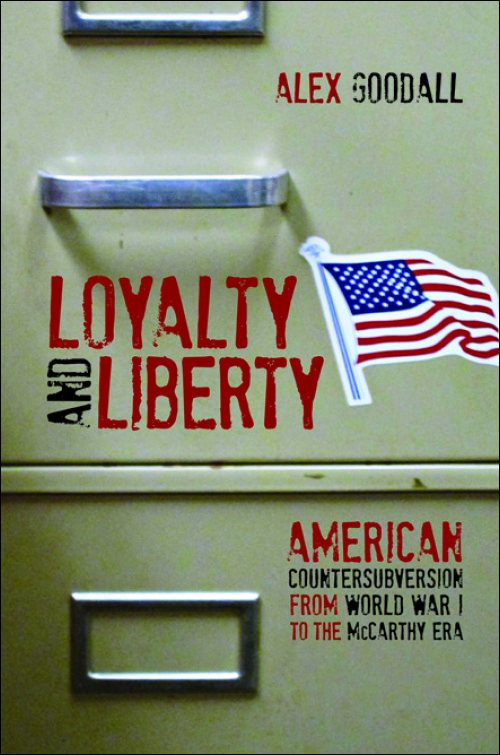 Loyalty and Liberty offers the first comprehensive account of the politics of countersubversion in the United States prior to the McCarthy era. Beginning with the loyalty politics of World War I, Alex Goodall traces the course of American countersubversion as it ebbed and flowed throughout the first half of the twentieth century, culminating in the rise of McCarthyism and the Cold War. This sweeping study explores how antisubversive fervor was dampened in the 1920s in response to the excesses of World War I, transformed by the politics of antifascism in the Depression era, and rekindled in opposition to Roosevelt's ambitious New Deal policies in the later 1930s and 1940s.

Identifying varied interest groups such as business tycoons, Christian denominations, and Southern Democrats, Goodall demonstrates how countersubversive politics was far from unified: groups often pursued clashing aims while struggling to balance the competing pulls of loyalty to the nation and liberty of thought, speech, and action. Meanwhile, the federal government pursued its own course, which alternately converged with and diverged from the paths followed by private organizations. By the end of World War II, alliances on the left and right had largely consolidated into the form they would keep during the Cold War. Anticommunists on the right worked to rein in the supposedly dictatorial ambitions of the Roosevelt administration, while New Deal liberals divided into several camps: the Popular Front, civil liberties activists, and embryonic Cold Warriors who struggled with how to respond to communist espionage in Washington and communist influence in politics more broadly.

Rigorous in its scholarship yet accessible to a wide audience, Goodall's masterful study shows how opposition to radicalism became a defining ideological question of American life.

Alex Goodall is a lecturer in modern history at the University of York, where he specializes in the history of revolutionary and counterrevolutionary politics in the Americas.

"Goodall's exceptional study will be welcomed by a wide variety of historians and political scientists. It breaks new ground as the first comprehensive account of pre-McCarthy politics. Highly Recommended."--Choice

"By tracing the ebb and flow of the various countersubversive campaigns over three decades, Goodall makes an important contribution to the existing literature that has tended to focus on either the Red Scare of 1919-1920, the "little red scare" of 1939-1940, or McCarthyism of the late 1940s and early 1950s. . . . offers some fresh insights that should be part of the conversation in this expanding field."--Labour/Le Travail

"Goodall's longer view of countersubversion bears fruit in the relationships and transitions it highlights, in its transformation of the familiar series of episodic pictures into a narrative of ebb and flow in which lingering traces of failure shaped how subsequent efforts played out."--American Historical Review

"The structure of the book suggests an important and unrecognized historical role for the interwar periods. There are lessons to be learned in Loyalty and Liberty."--The Journal of American History

"Alex Goodall's Loyalty and Liberty treats antiradicalism and antifascism as political movements, not psychological phenomena, and his close study of interwar counter subversive campaigns shows that their history is more faltering than standard accounts suggest. . . . Goodall's sparkling prose and sharp observations make this book an essential read for scholars of modern American politics."--Journal of American Studies

"Loyalty and Liberty is an impressive piece of scholarship that would be a valuable resource for anyone teaching this period in American history." --The History Teacher

"Loyalty and Liberty appears at a most appropriate moment. With remarkable richness, the book covers great political, social, and cultural territory, and Goodall puts some familiar people, incidents, and institutions in a new and revealing light. Its sophistication and scope put it head and shoulders above many local and regional studies of anticommunism."--Nelson Lichtenstein, author of State of the Union: A Century of American Labor

"This thoroughly researched, crisply written study adds to our historical understanding of subversion and countersubversion--the dance of radicalism and antiradicalism that has so dramatically shaped modern American politics--in an era before McCarthyism and the Cold War. This is a book that will have a notable and stimulating impact on the field of twentieth-century U.S. history."--Michael Kimmage, author of In History's Grip: Philip Roth's Newark Trilogy