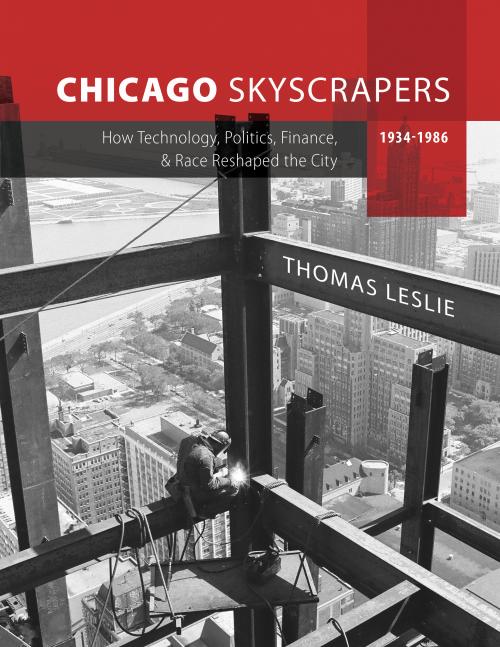 The John Hancock Center. Marina City. Sandburg Village. The Sears Tower. The Inland Steel Building. From skyline-defining icons to wonders of the world, the second period of the Chicago skyscraper transformed the way Chicagoans lived and worked. The Second Chicago School dominates many histories of the era. Yet these accounts often overlook essential Chicago sites, important areas away from downtown, the teams of people involved in the conception and construction of skyscrapers, and the financial, social, racial, and political factors that influenced the buildings that came to be.

Thomas Leslie’s comprehensive look at the modern era of Chicago skyscrapers rewrites the narrative to view the skyscraper idea, and the buildings themselves, within the broad expanse of city history. As construction emerged from the depths of the Great Depression, structural, mechanical, and cladding innovations evolved while continuing to influence designs. An earlier generation of architects would have been impressed--but not shocked--by expansive glass elevations and more efficient concrete columns, girders, and slabs. The truly radical changes concerned the motivations that drove construction of many new skyscrapers. While profit remained key in the Loop, developers elsewhere in Chicago worked with a Daley political regime that saw tall buildings as tools for a wholesale recasting of the city’s appearance, demography, and economy. Focusing on both the wider cityscape and specific buildings, Leslie reveals skyscrapers to be the physical results of negotiations between motivating and mechanical causes.

Illustrated with more than 140 photographs, Chicago Skyscrapers, 1934–1986 tells the fascinating stories of the people, ideas, negotiations, decision-making, compromises, and strategies that changed the history of architecture and one of its showcase cities.

Thomas Leslie is an architect, educator, and author. His books include Beauty's Rigor: Patterns of Production in the Work of Pier Luigi Nervi and Chicago Skyscrapers, 1871–1934.

“A worthy successor to the pathbreaking work of Carl Condit, this deeply researched volume explores the architectural design, structure and equipment of tall buildings in Chicago from the 1930s into the 1980s in their full and complex relationship to changing economic, social, and political realities in the city.”--Robert Bruegmann, author of Art Deco Chicago: Designing Modern America