When The Other Tongue appeared in 1982, it was called "required reading for all those concerned with English teaching in non-native situations, from the classroom teacher to thepolicy planner" )Jowhn Platt, English World-Wide) and "an extremely useful and stimulating collection" (William C. Ritchie, Language). It introduced refreshingly new perspectives for understanding the spread and functions of English around the world.

This dramatically revised volume contains eight new chapters, replacing or updating more than half of the first edition. The Other Tongue is the first attempt to integrate and address provocative issues relevant to a deeper understanding of the forms and functions of English within different sociolinguistic, cross-cultural, and cross-linguistic contexts. The volume discusses linguistic, literary, pedagogical, and attitudinal issues related to world Englishes.

Braj B. Kachru is professor of linguistics, comparative literature, education, and English as an International Language at the University of Illinois at Urbana-Champaign. He is co-editor of World Englishes and the author of The Alchemy of English: The Spread, Functions, and Models of Non-native Englishes, which was awarded joint first prize in the Duke of Edinburgh English Language Book Competition in 1987. 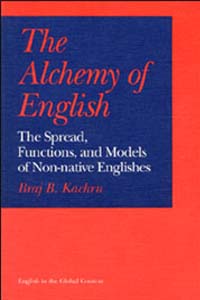 "An important book. . . . The Other Tongue should prove of great value to linguists, literary scholars, teachers of English as a foreign/second language, language policy planners, and users of 'nativized' Englishes."--Robert Kaplan, Applied Linguistics

"An important volume for any teacher of English who is confronted with a variety of localized forms of English, or who is interested in the complex nature and development of the language we use and teach. It not only provides a shock of recognition; it presents the teacher with a clear way to analyze the uses of English that may obtain in a polydialectal classroom."--Alan C. Purves, College of English

"Valuable for teachers who want to look that little bit further into relating language in the classroom to what goes on outside."--John Norrish, ELT Journal