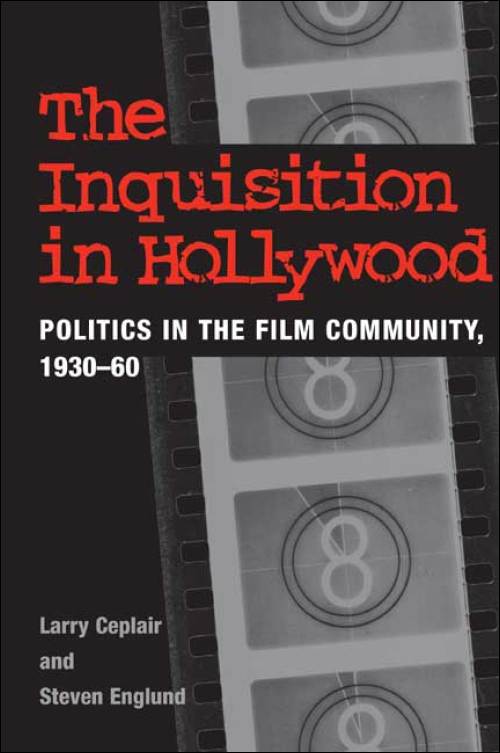 The Inquisition in Hollywood examines the suppression of radical political activity in the film industry from the days of the Great Depression through the tumultuous House Un-American Activities Commission era to the waning days of the infamous blacklist.

Although this thirty-year period of American history is marked by widespread targeting of leftists in all areas of life, those in the film industry–-predominately screenwriters–-were considered to be in positions of great potential indoctrinating power, and found themselves under intense scrutiny as the Cold War hysteria mounted.

Ceplair and Englund trace the history of political struggle in Hollywood back to the formation of the Screen Writers Guild in 1933. Many of the blacklisted filmmakers were members of the Communist Party and all of the graylisted filmmakers had expressed their sympathy with progressive (mainly anti-fascist) causes.

Although no Hollywood Communist has ever been linked to espionage or sabotage, and charges of subversive indoctrination have no basis in documented fact, this book powerfully shows how devastating a mere suspicion or insinuation of guilt could be during the era of the Red Menace.

Twenty-two years after its initial publication, The Inquisition in Hollywood remains the definitive work on the blacklist era, and this new edition features a new introduction by the authors.

Larry Ceplair, a professor of history at Santa Monica College, is the author of The Public Years of Sarah and Angelina Grimké, Charlotte Perkins: A Nonfiction Reader, Under the Shadow of War: Fascism, Anti-Fascism, and Marxists, and A Great Lady: A Life of the Screenwriter Sonya Levien. Steven Englund is the author of Man Slaughter and Grace of Monaco: An Interpretive Biography.

"The Inquisition in Hollywood is a classic text that refuses to be outdated: it tells the inside story of Hollywood radicals and their victimization, one of the least understood and least appreciated episodes in the history of American art. The scrupulous research, the lucid commentary, and hard-hitting conclusions make The Inquisition in Hollywood a major contribution."--Paul Buhle, coauthor of Tender Comrades: A Backstory of the Hollywood Blacklist