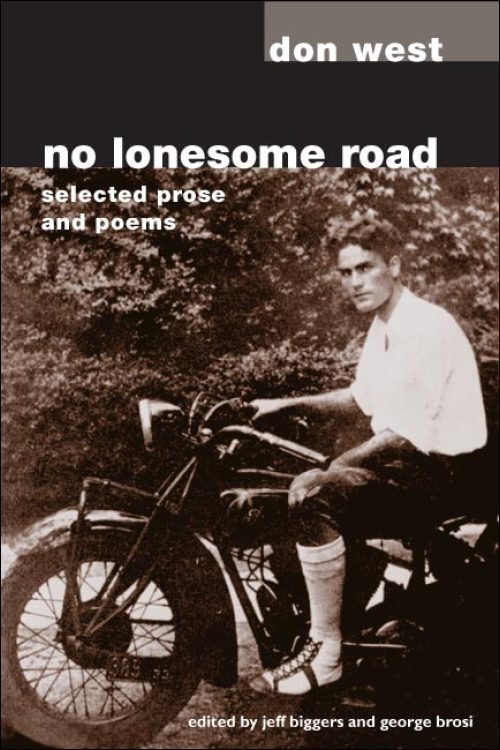 This is the first book to celebrate the life and writing of one of the most charismatic Southern leaders of the middle twentieth century, Don West (1906-1992). West was a poet, a pioneer advocate for civil rights, a preacher, a historian, a labor organizer, a folk-music revivalist, an essayist, and an organic farmer. He is perhaps best known as an educator, primarily as cofounder of the Highlander Folk School in Tennessee and founder of the Appalachian South Folklife Center in West Virginia. In his old age, West served as an elder statesman for his causes.

No Lonesome Road allows Don West to speak for himself. It provides the most comprehensive collection of his poetry ever published, spanning five decades of his literary career. It also includes the first comprehensive and annotated collection of West's nonfiction essays, articles, letters, speeches, and stories, covering his role at the forefront of Southern and Appalachian history, and as a pioneer researcher and writer on the South's little-known legacy of radical activism.

Drawing from both primary and secondary sources, including previously unknown documents, correspondence, interviews, FBI files, and newspaper clippings, the introduction by Jeff Biggers stands as the most thorough, insightful biographical sketch of Don West yet published in any form.

The afterword by George Brosi is a stirring personal tribute to the contributions of West and also serves as a thoughtful reflection on the interactions between the radicals of the 1930s and the 1960s.

The best possible introduction to his extraordinary life and work, this annotated selection of Don West's writings will be inspirational reading for anyone interested in Southern history, poetry, religion, or activism.

Jeff Biggers is a writer and radio correspondent based in Illinois and Italy. He has contributed to NPR, PRI, The Atlantic, and other periodicals. George Brosi, a long-time associate of Don West, is a bookseller, authority on writings about Appalachia, and the editor of Appalachian Heritage. He teaches at Eastern Kentucky University.

"A handsome and intense young radical [who] gained near legendary status as a sort of phantom revolutionary who left a trail of radical poems and sermons in his wake . . . hiding from the law or fleeing on his motorcycle just one jump ahead of the cops."--John Egerton, author of Speak Now Against the Day: The Generation Before the Civil Rights Movement

American Book Award, given by the Before Columbus Foundation, 2005.