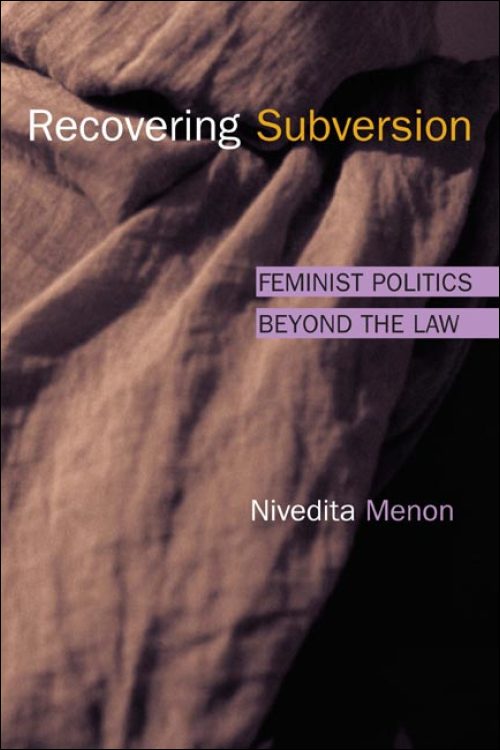 Is the language of rights enough to foster real social and political change? Nivedita Menon explores the relationship between law and feminist politics by examining the contemporary Indian women's movement with comparisons to France and the United States. She argues that the intersection of feminist politics, law, and the state often paradoxically and severely distorts important ethical and emancipatory impulses of feminism.

Menon reviews historical challenges to the liberal notion of rights from Marxist, feminist, postcolonial, and critical legal scholars, and analyzes current Indian debates on topics including abortion, sexual violence, and Parliamentary quotas for women. Far from being a call to withdraw from the arena of law, Recovering Subversion instead urges feminists everywhere to recognize the limits of "rights discourse" and pleads for a politics that goes beyond its boundaries.

Nivedita Menon, Reader in the Department of Political Science at the University of Delhi, is the editor of Gender and Politics in India.

"Menon unpacks the practical difficulties, the ideological contradictions, and the political impasses that have accompanied the Indian women's movement's attempts to deal with questions of violence, abortion, rape, and parliamentary representation. The result is a very important and provocative piece of scholarship that will help feminists everywhere think through the complexities of gender, citizenship, and rights in today's world."--Ania Loomba, Catherine Bryson Professor of English, University of Pennsylvania

"Nivedita Menon is among the most interesting intellectuals writing in the Indian academy today. This collection of her essays has been long awaited, and the final product is thought-provoking, energetic, and a pleasure to read. A work of such a high order of intelligence and theoretical sophistication is a rare thing." --Rajeswari Sunder Rajan, Professorial Fellow, Wolfson College and Reader in English, University of Oxford